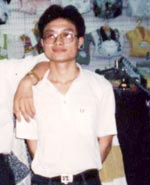 The above picture is of Dafa practitioner Wang Xin. The forced labor camp in Nanchang tortured him to death on July 2, 2001. I would like to shed some light on what happened to the best of my knowledge.

Mr. Wang Xin was born on August 29, 1973. His home address was No. 27, Shangtangyanshang, Xihu District, Nanchang City, Jiangxi Province. Before his death, Wang Xin was illegally detained in the Nanchang City forced labor camp because he practiced Falun Dafa. While he was detained, the guards tried to brainwash him. However, he remained steadfast in his belief no matter what the guards did or said.

From 2000 to 2001, the Nanchang City Forced Labor Camp detained dozens of Dafa practitioners. Like other practitioners, Wang Xin was severely abused after he was incarcerated at the labor camp. He was followed even when he used the washroom. Most Dafa practitioners were beat by the guards. Whenever a practitioner practiced the exercises, he would be beaten or handcuffed for a whole night. Then, a practitioner would be sent to more severe sections of the labor camp such as section two, three, and five if he still refused to give in after some brainwashing sessions.

Wang Xin was detained in Section Five. After he was discovered reading Teacher's articles and Dafa books, the head of section five beat Wang Xin and took the literature away. Wang Xin went on a hunger strike to protest (he had gone on one once before), requesting that the head of the section be punished and that Master's articles and Dafa books be returned to him. However, nobody in the forced labor camp came to resolve this issue. After he had been on the hunger strike for more than 10 days, he was sent to section one to be forcefully brainwashed. Seeing that the brainwashing was to no avail, the guards force-fed him. Several days later, when Wang Xin was tortured to the point of death, he was sent to the Jiangxi Province forced labor camp hospital. He was so weak that his limp body had to be carried out of the forced labor camp on someone's back. Fellow practitioners in the forced labor camp did not know about his death until much later. Wang Xin was only 28.

Yuan, the head of section one, said when someone reported that Wang Xin was about to die, "More than ten days of hunger strike should not be a problem. Wait a few more days and see what happens." I believe that those people must be held accountable for the death of Wang Xin.