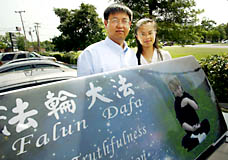 Xueyuan Wu and her husband, Bei Gou, stopped in Nashville during their cross-country tour to raise awareness about the plight of Falun Gong followers in China. Wu's mother is imprisoned in a Chinese labor camp for her beliefs.

Xueyuan Wu and her husband, Bei Gou, stopped in Nashville during their cross-country tour to raise awareness about the plight of Falun Gong followers in China. Wu's mother is imprisoned in a Chinese labor camp for her beliefs.

Xueyuan Wu hasn't seen or talked with her 68-year-old mother in six months.

Wu doesn't know if she is dead or alive.

Gripped with worry and a fear of running out of time, Wu and her husband, Bei Gou, of Albany, N.Y., embarked on a 2,000-mile trip across the country to raise awareness about what they allege is the persecution of Falun Gong practitioners in China, especially Wu's mother, Lingwen Zeng.

Wu, a physicist, and Gou, an electrical engineer, both 35, visited 10 cities, including Nashville, Cincinnati, St. Louis and Dallas.

Since July 22, 1999, when it was banned by the government [...] Falun Gong has alleged it has been the target of sometimes-violent persecution in China, spearheaded by former Chinese President Jiang Zemin. Hu Jintao became president in March, although [Jiang] was put in charge of the country's Central Military Commission. But the change in leadership doesn't seem to have affected Falun Gong followers.

''We actually don't depend on the new government,'' Wu said. ''They are still under control of the former president. He is still controlling the military, so he is controlling everything else. Even though there are new current officials, they don't have real power.''

The July 2002 issue of Compassion, a Falun Gong journal, attributes the discrimination against the movement to political struggles. ''With government estimates of between 70-100 million practicing Falun Gong,'' the journal said, ''[Jiang] [was] fearful of anything touching more hearts and minds and more citizens than the Communist Party.''

Practitioners are placed in labor camps, prisons or psychiatric hospitals, according to the Amnesty International Web site. There, the prisoners are asked to renounce their beliefs and are often subjected to beatings, torture and even death.

The Amnesty International annual report estimated that about 500 practitioners had died while in custody by the end of last year. Some 310,000 people, detained without being charged or put on trial, were sent to labor camps in 2001, the report said.

On February 9, 2002, three days before the Chinese Lunar New Year, local police arrested Zeng for the third time, Wu said. Because she would not give up her beliefs, Zeng was sentenced to two years in the Changchun Heizuizi Female Forced-Labor Re-education Camp, without a trial.

Wu's family has not be able to visit or talk with Zeng since February. ''It's not easy for me to open this story to the public,'' said Wu. ''If we go back home, chances are that we would be arrested.''

The couple arranged meetings with city and state officials requesting them to write letters to the Chinese government to help rescue people who have been illegally detained, imprisoned and tortured by Chinese authorities.

''We are especially encouraged to see that a number of family members have gained an early release from China's prisons through support from government officials of different countries,'' said Wu.

During their two-day stint in Nashville two weeks ago, the couple spoke with representatives from Sen. Lamar Alexander's office and Sen. Bill Frist's office.

Other peaceful public appeals and demonstrations have been held worldwide.

In the meantime Wu and Gou remain hopeful. ''We can make a difference in current world events, especially at a time when we often feel powerless,'' Wu said.

Some basics of Falun Gong

A traditional Chinese self-cultivation practice, also referred to as Falun Dafa, that combines [gentle exercises and following the principle of Truthfulness, Compassion Tolerance in daily life]. It improves mental and physical wellness through a series of exercises, meditations and development of one's heart and mind nature.

How can I learn more about Falun Gong?

The core teachings are found in the book Zhuan Falun (Revolving the Law Wheel) by Li Hongzhi. China Falun Gong is an introductory book with color photo illustrations of the exercises. And The Falun Dafa Exercise Instruction Video demonstrates step-by-step instructions for the five sets of exercises.

Practice sessions are held 9-11 a.m. every Saturday and Sunday at Centennial Park, and classes are offered through the Hillsboro Community Education Program. The last class is scheduled for July 29. For more information, call 298-8408.

“Statement by the Vice Chair of the U.S. Commission on International Religious Freedom (Excerpted)”