(Clearwisdom.net June 15, 2003) On the evening of June 11, the 2003 Canada Day Achievement Award ceremony was held in Toronto's city hall. The award commends those volunteers who have made outstanding contributions to Canadian society and the community.

The award was established 20 years ago and is given around July 1, Canada National Day at Toronto's City Hall. This year 59 Toronto residents were recognized.

Falun Gong practitioner Mr. Zhang Zhaojin received the award for his efforts in assisting the Canadian government to rescue another Falun Gong practitioner from the United Arab Emirates when she faced immediate deportation due to pressure from the Chinese government, as well as his volunteering to coordinate the activities of the Falun Dafa Association over the past five years, and for organizing and participating in many activities that benefited the community. These activities attracted many Toronto residents to learn Falun Gong. 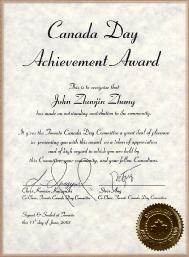 Mr. Zhaojin Zhang, who is from China, works at George Brown College. He is involved in community services and has made great contributions to society.

Toronto City Councillor and co-chair of the Toronto National Day Celebration Committee Mr. Chris Korwin Kuczynski said, "The recipients contributed to society unselfishly and not for material gain. Many of them have been outstanding in helping the community. It is my responsibility to say 'Thank You' to them, especially on Canada Day. It is because of these types of citizens that Canada is a great country. I am proud of them."

Mr. Zhaojin Zhang sees this award as not just recognition for himself, but also for all Falun Gong practitioners. He said, "It demonstrates that the Canadian government and its people have a good understanding of Falun Gong and the principles of Truthfulness-Compassion-Tolerance. It also showed how the Canadian government and people support and respect Falun Gong. Canada emphasizes the importance of volunteers, and Falun Gong practitioners' contributions to Canadian society are well recognized."