(Clearwisdom.net) CHAM - On Saturday a group of Falun gong practitioners went to Market Place in the center of Cham to raise awareness of the persecution happening in their home country, China. Falun Gong, also called Falun Dafa, is a traditional Chinese meditation system based on the principle of truthfulness, compassion and tolerance. The teachings teach practitioners to be always kind to others, put others first. It is what demonstrators are doing. In China approximately 700 people have been tortured to death, thousands have been thrown into jail. "This persecution is out of no reason," said Mr. Romer of the international society for human rights, who supported the Chinese visitors at the market place. The Chinese tried to collect signatures, on the one hand for the support of the lawsuit against the former head of state Jiang Zemin, who is accused of genocide in US and on the other hand for an appeal to the Federal Government to rescue Xiong Wei 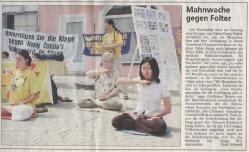