(clearwisdom.net) In order to support the lawsuit against Dictator Jiang Zemin Israeli practitioners gathered opposite Chinese embassy in Tel Aviv several times during the past month. Practitioners sent forth righteous thoughts and performed the Falun Gong exercises. Many citizens were attracted by exhibited materials, signed petition against severe persecution of Falun Gong in China and petition calling for the immediate release of Xiong Wei from labor camp. Some of them wanted to learn more about Falun Gong. 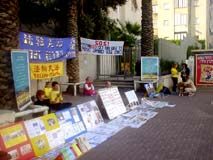 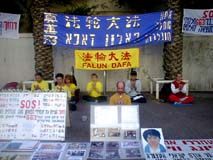 Israeli practitioners wrote several letters to Ukrainian embassy expressing concern about the pressure that Falun Gong practitioners experience in this country. On 22 of April practitioners were invited to the embassy where they held a productive discussion with Counselor for Political Affairs Mr. Alexander Levchenko. Practitioners shared their understanding that Ukrainian position towards the persecution can cause a negative effect on the future of this country. During a discussion Mr. Levchenko stated that such a severe human right violation as those take place in China can't be tolerated and that the situation in Ukraine have to be solved on a legal basis. He assured that all materials he received from practitioners and report about this meeting will be send to Ukrainian Ministry of Foreign Affairs.

On the same day, Yediot Aharonot newspaper (one of two leading Israeli newspapers) published an interview with a Falun Dafa practitioner. His dramatic personal story touched many readers and cause many of them want to learn more about Falun Dafa. People called practitioners and asked where they can find the book Zhuan Falun.

This month Israeli practitioners were invited by organizers of different festivals to hold exercises demonstrations and workshops, such as New Age Festival in Tel Aviv and World Tai Chi Day celebrations in Jerusalem.

On the photos practitioners perform exercises and hold a workshop at New Age Festival in Tel Aviv.

“Canada: Practitioners Rally in Montreal's Chinatown to Commemorate the Fourth Anniversary of the Zhongnanhai Appeal (Photos)”

“Canada: On the Fourth Anniversary of the April 25 Peaceful Appeal, Practitioners Introduce Falun Dafa and Explain the Facts at a Health Expo in Edmonton (Photos) ”