The following photos are provided by Mr. Li Shixiong, Chairman of the New York based "Committee to Investigate Persecution of Religions in China." There is no need for more words, as they provide true evidence of Jiang Zemin's "best period of human rights in China".

"A picture is worth a thousand words." The following photo won a prize at the 44th annual World Press Photo (WPP) contest, which was established in 1957 in Holland and is regarded the Oscar award in press photography. Associated Press journalist Chien-Min Chung took the photograph "Police arrests Falun Gong." This image captured what happened in Tiananmen Square in Beijing during the Chinese National Day on October 1st, 2001. 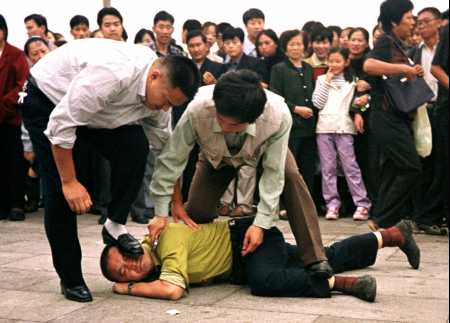 This shocking photo is a telling exposure of what Jiang Zemin describes as "the best period of human rights in China." It is also a silent condemnation of the observers on the sidelines who watched the crime with unconcern.

U.S. resident Dr. Teng Chunyan disappeared in March 2000 after she returned to China. In October 2000, she was sentenced to three years of imprisonment in a secret trial, simply because she passed on to overseas journalists a few photos of Falun Gong practitioners illegally detained in a Beijing Mental Hospital. 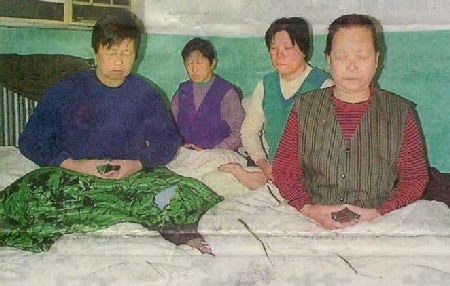 Publishing this series of photographs bears special significance at the opening session of the 59th Annual Meeting of the United Nations Commission on Human Rights. Mr. Li Shixiong has provided these photographs. Journalists ask the question on everyone's mind: How could these photographs be taken?

Mr. Li Shixiong said that they were taken by family members of other policemen, who are also members of the Family Church. These people risked their lives taking these photographs. These people know the police well, so the policemen did not take much notice when the photographs were taken because they also took photographs of other things. Besides, the policemen torture people everyday and it is like part of their daily routine, nothing special. Some policemen even considered these photographs might be used as evidence to gain recognition or awards from their superiors in the future. Some policemen in the photographs enjoy torturing people, taking it as their "job." If they become suspicious, a person will be arrested if he or she is found taking photographs at the prison gate. Mr. Li Shixiong claims that as far as he knows, some 20 religious group members have been arrested while trying to take photographs in China.

Li Shixiong wrote a letter to the chairman of the International Olympic Committee, comparing Jiang Zemin with Hitler in World War II. He points out that some people flaunt the banner of national interest while committing terrorism in the name of "national law" to fulfil their own distorted, personal ambitions. Li Shixiong also criticises the silence in the international community and their pretense that they do not even see such state terrorism. This kind of behavior not only leads to the spread of terrorism around the world, stimulating the courage of terrorists and strengthening their determination, but has also become the evil root of modern terrorism.

Li Shixiong pointed out in his letter, "Since China's economic reform and opening-up policy, at least 2.7 million among the 60 million of the Family Church Christians have been arrested (that is, one in every 22 people); 440,000 were sentenced to forced labour "re-education;" 750 are on a wanted list; 200,000 were forced to leave their homes and became homeless or are on the run; more than 10,000 have died as a result of persecution; more than 20,000 have been disabled from torture; some 130,000 are under surveillance in their residences; some 1,120,000 are fined at the authorities' will." These statistics are conservative figures since the autumn of 2000, when more than 20,000 Christians started their investigation of more than 560,000 Christians of the Family Church in 207 large and small cities in 22 provinces and numerous villages.

Li Shixiong provided the International Olympic Committee with evidence of China's human rights violations - a secret document from the Department of Public Security of Jilin Province. This document specifically emphasises "To strike hard against Falun Gong practitioners and promoters; arrest them on the spot when found. Arrest warrants can be issued at a later time." In fact, the Chinese government's persecution of Falun Gong is far more severe than that of the Family Church. It is reported that Jiang Zemin issued an order through the different levels of government to labor camps and prisons, "Beating Falun Gong practitioners to death is nothing; the death is counted as suicide" and no legal procedures are applicable to Falun Gong practitioners and followers of the Family Church. Evidence of these policies being in effect are clearly shown in the following set of photographs.

A high-ranking police officer in Beijing reveals this inside story: "At the moment, Falun Gong practitioners are fined 40,000 Yuan if arrested. They will be immediately buried if tortured to death for refusing to be transformed, and the outside world will be told that the person involved has escaped."

Regarding Severe Crackdown on Illegal Organizations

According to regulations from the Ministry of Public Security of the State Council and the Supreme People's Court, in order to ensure a smooth running of the 2008 Olympic Games in our country, to stabilize the social order, and to severely deal with illegal rallies, assemblies, and other activities that disrupt the social order, it is hereby announced that

No Laws are Observed During the Persecution

Li Shixiong stated that the forces and ranges of persecutions of religions in China today are obviously more severe than the traditional political persecutions in the past. The Communist Party persecutes all those with religious beliefs, as well as those whom they do not like, without any legal basis. The persecution is not only limited to those involved in the Family Church.

When asked if the Chinese government allows the existence of government-approved churches in China, Li Shixiong said that the government-approved churches are only a tool to hoodwink the public, to disguise the elimination of religions and to create the illusion that China has religious freedom. Superficially, the government-approved churches profess a belief in God, when in fact they believe in the Communist Party. What kind of religion are these "patriotic churches"? Devout Christian Li Shixiong does not approve of the recent visit by China's official religious leader Fu Tieshan to Canada. He said that Fu Tieshan believes only in Jiang Zemin and not in God, and he is only a fake! The chairman of the Buddhist Association, Zhao Puchu, was a high-ranking bureau-level Communist official when he was alive. 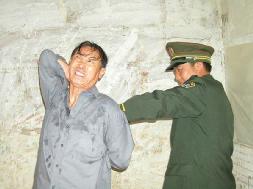 This is a commonly used torture, "Bei Baojian" - "Carrying a sword on one's back"- with both arms handcuffed at the back of one's body. The policeman was pulling on the handcuff, and threatening the victim to "dance," do "the disco dance" to increase pain for the tortured person. 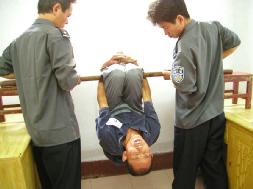 Photo 8: Chinese Police were in the Process of Seriously "enforcing the law." Torture victim is Huang Xikai, a follower of the Family Church. Location: Xinghuaying Patrol Brigade and Kaifeng County Detention Center, Kaifeng County, Henan Province. Time: June 2002. Violence perpetrators: a policeman (about 30 years old) from Xinghuaying Patrol Brigade; officer Yang and four others from Kaifeng County Public Security Department. The police themselves invented this form of torture. They have experimented with many ways of hanging. They can do the experience on people and will enforce whatever they can think of! They call this method of hanging "lifting the sedan chair." The picture shows the victim just being tied and hung up. The victim would be held in that position for hours, unable to move. If the victim moved or struggle, he would fall and be seriously injured. Click on the picture and look at the enlarged picture and you will see that just as the victim was hung up, his wrists were bleeding from to the handcuffs. 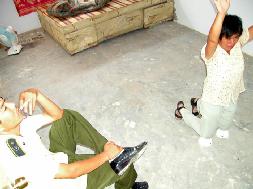 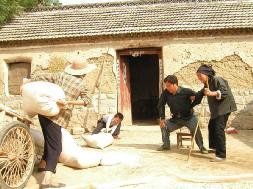 Photo 16: Christian Liu Yan (37 years old) from Anhui Province was disabled due to torture by police. At present he can only stare blankly at his wife and under-aged son struggling with the heavy work. It is pitiful to see his hunch-backed mother having to support him. Location of torture: Huainan City Labor Camp, Anhui Province. Violence perpetrators: Huainan City Labor Camp No. 3 Division political chief Gu Weiguang (male, about 30 years old), the deputy political chief and a secretary from the No. 3 Division of the labor camp, who is nicknamed "Zou No. 4" (male, about 30 years old). 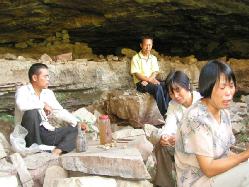 In the photo are a few from among the tens of thousands of "fugitives." From the expression of their eyes and their cries, we see the "dignity" of the law in China, or we see the sufferings of China's citizens? They are the Family Church members Liu Lianfa and his wife Li Qiaozhi; Li Kui and his wife Zhao Xuezhi from Ciba Township, Jiaxian County, Henan Province. "At about 4:00 pm on June 29, 2001, because we were pursued by people led by the No. 5 criminal unit chief Ma Yong and others from Jiaxian County Public Security Bureau, our families fled to Zhiyun Mountain's Zhushi Peak area in Liangyao Village, Jiaocun Township in Ruzhou City, and hid in a cave for a month. Later, we found a cave nearby, known as Dashipeng, and hid there for another two months. We are still fugitives, with homes, but cannot return to them." 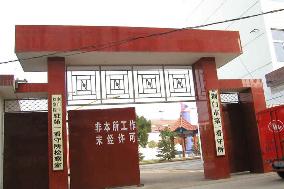 Photo 17: This is the No. 1 Detention Center in Jingmen City, Hubei Province where the Family Church members Gong Shengliang, Li Enhui from Huanan Family Church are imprisoned. The location is at a place named "huya guan" - "Tiger's Teeth Pass."

“Explaining the Fa During the 2003 Lantern Festival at the U.S. West Fa Conference ”

“Police in Liaoning Province Bring Disaster to Their Families”