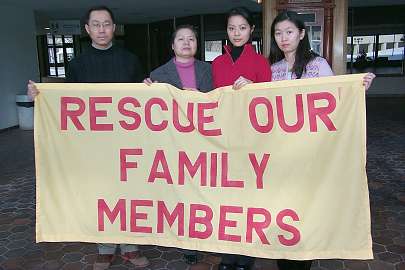 Canadian Falun Gong practitioners Ming Zhai (left), Yan Ying Wang, Cecilia Xiong and Peijong Hsieh, visited Sudbury on Tuesday. They worry that their loved ones in China will face imprisonment or execution for their beliefs.

- Cecilia Xiong says her mother was "beaten blind and deaf" in a Chinese detention centre for practising Falun Gong, a peaceful spiritual practice that upholds the values of truthfulness, compassion and tolerance.

Xiong, a Canadian adherent to Falun Gong, says thousands of her fellow practitioners are being tortured daily in China. Among them are a handful of Canadian citizens and a number of family members of Canadians.

Xiong and a small contingent of Falun Gong followers visited Sudbury on Tuesday to express gratitude for the support they've received from municipal, provincial and federal government officials here. They are on a five-week tour of the province in an effort to gain further support for their cause.

Canadian pressure on Chinese officials has resulted in the release of nine of their family members from Chinese prisons, among them Kunlun Zhang, a leading professor of art and a Canadian citizen, and Yueli Yang, an engineer who helped develop China's first satellite.

Her son lives in Toronto.

Falun Gong was introduced to China in 1992 and spread rapidly to embrace more than 50 million practitioners in that country. There are followers in 50 other countries around the world.

According to Peijong Hsieh, part of the contingent that visited Sudbury, practitioners seek fulfillment through a combination of gentle exercises, meditation and adherence to universal virtues. Falun Gong, she said, is non-political, owns no property and has little organizational structure.

Chinese president Jiang Zemin [permitted] the practice until 1999, when it was outlawed. A brutal program of repression has, according to international sources, resulted in 578 confirmed deaths and the imprisonment of as many as 100,000 Falun Gong adherents.

"Because the movement was so well-received, and because the dictator's political power was so insecure, the crack down was imposed," Hsieh said. "All practitioners were forced into exile. You can't talk about or practice Falun Gong in China."

The Chinese government, she added, has spent millions on a propaganda campaign to discredit the movement, and various methods of torture -- including the use of electric shock, water dungeons, suffocation, force feeding and the driving of bamboo sticks into the fingers -- are used to force victims to recant their beliefs.

Five months ago, the Canadian contingent began a tour of Canada, enlisting the support of mayors, and provincial and federal representatives. The group is now asking Canadians to initiate a United Nations resolution condemning China's human rights abuses. The UN's Commission on Human Rights convenes in Geneva in March.

"Canada has an international reputation as a peacekeeper and has a responsibility to use its voice to push for the unconditional release and fair treatment of the Falun Gong in China," said Hsieh.

No government, she added, should force its citizens to give up their right to become better people, which is what Falun Gong practitioners are intent upon doing.

"These are very peaceful people who don't hurt anyone," she said. "They are only seeking to cleanse their minds and bodies and, for that, they have been brutalized beyond imagination."

Xiong said her mother continues to live somewhere in China. Other members of her family face imprisonment and possible execution in that country because of their beliefs.

"The communism of China has moved so far away from the principles that Falun Gong teaches -- truthfulness, compassion and tolerance," she said. "Raising one's virtue and moral standard is not valued by the authorities.

"They said they would kill the Falun Gong without mercy, that they would wipe them out in three months. Four years later, the movement is still spreading."