Philadelphia, USA: Calling for an End to the Persecution in Front of the Liberty Bell (Photo)

(Clearwisdom.net) Philadelphia's Liberty Bell is a symbol of America's freedom and democracy, and it is a very famous tourist site. To call for help to stop the Jiang regime's persecution against Falun Gong practitioners, local practitioners have come to the Liberty Bell to practice the exercises on a daily basis and distribute truth-clarifying materials since the persecution started in 1999. 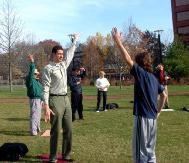 Practicing in front of the Liberty Bell

On a Sunday morning, more than 10 Falun Gong practitioners practiced on the lawn in front of the Liberty Bell. When the practitioners were practicing the second set of the exercises, a Chinese lady came and watched us practicing. Seeing that she was observing, I approached her with a smile and talked with her. She told me that she came from Connecticut to see the Liberty Bell and was attracted by our practice. At that time, there were Caucasian, African-American, Chinese, and Korean practitioners practicing the exercises. She said that there were few Chinese people where she lives, and she didn't know that people from so many different races practiced Falun Gong. She also said that she had two professor friends in China who had been persecuted for practicing Falun Gong. She was surprised to hear that more than 800 Falun Gong practitioners have been persecuted to death for persisting in this peaceful practice.

Each day, many tourists signed our petition book to call for an immediate end of the persecution and release of U.S. citizen Charles Li, who has been illegally imprisoned by the Jiang regime.