(Clearwisdom.net) From Friday through Monday (September 6-9), Falun Gong practitioners from New England demonstrated the Falun Gong exercises to thousands of residents in many towns in northern New Hampshire and Vermont. 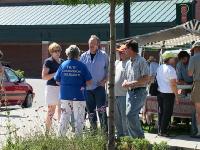 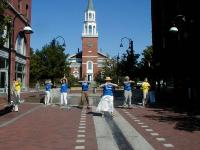 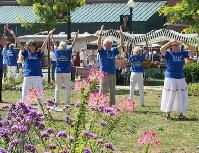 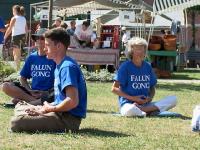 People are truly waiting for the Fa. On a busy pedestrian walkway in Burlington, Vermont, a young woman watched the demonstration for a long time. She approached a practitioner and said she felt something very strong in her and could not stop watching us. She then followed the practitioners down the walkway when they had to leave for another town. A practitioner promised to send the book Zhuan Falun to her and she was very happy.

In Littleton, New Hampshire, practitioners did the exercises on the Court House lawn and generated much interest. Many people wanted to know where they could learn more about the cultivation practice. A New Hampshire legislator watched them for a long time then approached and said she was very moved and was waiting for this. She wanted to help us in the legislature and gave the names of a TV station manager who could show Dafa videos and a newspaper editor who could advertise a workshop. The local community center gladly agreed on the spot to sponsor an informational workshop.

The events included exercise demonstrations of Falun Gong's 5 slow and gentle exercises as well as answering the many questions people have on why is China persecuting Falun Gong and harassing US citizens who practice it in America. More and more people are asking how the principles of Falun Gong, Truthfulness-Compassion-Forbearance, can help bring greater peace and understanding to people's lives.

Practitioners also wanted to express thanks to the Vermont and New Hampshire congressional delegations for their unanimous support and passage of House Resolution 188 (passed in late July), which calls for an immediate end to both the persecution of Falun Gong in China and to the harassment of US citizens and officials by Chinese consulates in America.

They walked to show New Hampshire and Vermont citizens that the world clearly needs the embodiment of the principles of Truthfulness-Compassion-Tolerance.