Letter from US Congressman Mike Ferguson to the Prime Minister of Iceland, David Oddsson

I am writing on behalf of the many Falun Gong practitioners in my district.

In my experience, I have found Falun Gong to be a docile practice, centering on three core principles: Truthfulness, Compassion and Forbearance. I have found that its practitioners are among the most peaceful and law-abiding citizens in my district.

Unfortunately, Falun Gong practitioners face tremendous persecution by the government of the People's Republic of China. China is the home of Falun Gong, yet the practice has been banned in that country for seemingly being nothing more than an exercise of the mind and spirit.

Falun Gong practitioners have been beaten, arrested and reportedly killed for merely publicly displaying and engaging in their sacred practice of meditation. I find China's behaviour reprehensible and their actions against every principle that free and democratic societies hold dear.

China's harassment of Falun Gong has not gone unrecognised by the United States. On July 24, 2002, the U.S. House of Representatives unanimously passed H.R. 188, a resolution expressing the peaceful nature of Falun Gong. The bill also calls for the end of China's persecution of Falun Gong practitioners.

I am grateful for the opportunity to help introduce you to the practice of Falun Gong. As a free and democratic county, I hope that Iceland will accommodate the practitioners of this peaceful exercise. 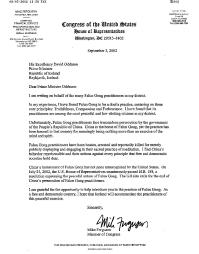