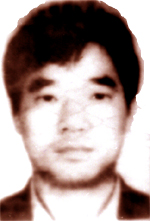 Gui Xunhua, male, born in 1964, from Xinhe Village, Xiaochi township, Huangmei County, was the accountant of his village. He had serious hepatitis B before attaining Dafa, and medical treatment had been ineffective. In 1997, after he attained Dafa, he rapidly and miraculously returned to good health. Once doctors from the county conducted a special physical examination, and concluded, "We've examined very many people, but never have we met anyone as healthy as you." In light of these facts his family and friends changed their view about Dafa in varying degrees.

After July 20, 1999, facing the massive slander campaign and persecution of Dafa, Gui Xunhua went to Beijing three times, hoping to ask for fair treatment for Dafa, but was fired from his job, jailed and tortured three times in the first labor camp of Huangmei County. His wife was also sent to a forced labor camp.

At around 5 pm on March 11, 2002, the local Xiaochi Township police, in collusion with the "610" office of Jiujiang City's Public Security Bureau, illegally arrested Gui Xunhua without any legal reasons. Onlookers were very angry over this. Later, his family repeatedly requested permission to visit him, but were refused by the Lushan police branch of Jiujiang City, on the pretext that Gui's health was not good.

On May 31, 2002, police asked his family to take him for "medical treatment outside of the jail". When his family arrived at the jail, Gui had already died. All that was left of Gui were his bones. He had once been a robust 180lb. He was still shackled and handcuffed. His urinary tract was damaged by forceful insertion of tubes and was still bleeding. The whole scene was too horrible to look at. Doctors and patients all knew that Gui had been tortured to death, and that sending him to a hospital was only to hide the truth and escape their responsibility in his death.

During the funeral procession, the police station dispatched many police cars to seal the road between Jiujiang city, Jiangxi province and the Xiaochi township of Huangmei county, Hubei province, to prevent the news and the true facts about the death from reaching the public. Yet, all the local people knew that Gui Xunhua had been tortured to death just because he practiced Dafa and tried to be a good person.

Within only 80 days, an energetic strong man was tortured to death, leaving his elderly parents and three children alone.

We hope all kind-hearted people pay attention to the cruel treatment of Dafa practitioners. Please give your support to them!