(Clearwisom.net) [Editors' note: Throughout history, the theme that a nation's fate is closely tied to the virtue of its leaders and people has been prevalent in both Chinese and Western culture and lore. Many wise, virtuous kings have led their nations to peace and prosperity, while conversely, moral decay in high places has led to the downfall of great empires. These articles are meant to serve as a reminder and wake-up call for those who are leading or participating in large-scale acts of violence and injustice. As Teacher Li Hongzhi said in Essentials for Further Advancement, "When people do not have virtue, natural calamities and man-made disasters will abound."]

In Liaoning Province it rained continuously for 5 days, while the cities of Shenyang and Anshan were struck by rare hailstorms.

According to a Liaoshen Evening News report on July 17: Since July 11, it rained continuously in most areas of Liaoning Province for five consecutive days. Historically rare gale force winds and hail also hit the cities of Shenyang, Liaoning and Anshan.

According to incomplete preliminary statistics from the departments concerned, 1.4 million mu (1 acre = 6.7 mu) of grains and vegetables were affected by the disaster, 40,000 mu of fruit trees, and 10,000 mu of forest. Eight grain storage facilities were damaged, and over 200 business enterprises stopped production due to the loss of electricity. 440 electric poles were down; the roadbeds and some bridges were damaged; 13 counties and towns had an interruption of electric power for 36 hours, and 39,000 houses collapsed. 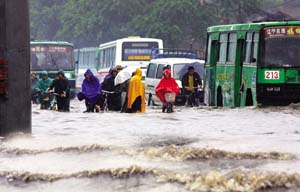 The photo shows vehicles and pedestrians wading through water on the road.