Hartford Courant: Getting Into The Spirit 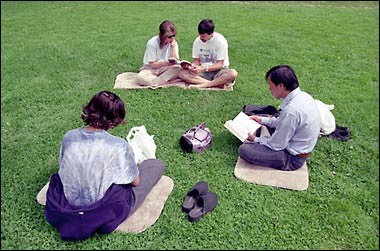 On a warm and peaceful Sunday morning in Hartford's Bushnell Park, a man and woman stand facing each other, eyes closed, slowly raising their arms in unison, palms facing inward.

In the morning stillness, small sounds can be heard clearly - chirping birds, water fountain splashes, distant church bells and soft Chinese music from a tape recorder at their feet.

A few passersby watch as the pair slowly move through a series of five tai-chi-like exercises. The more curious tend to linger, and some even settle on the grass to watch.

The first contact with Falun Gong often occurs this way. Those seeking spirituality may find it in the serenity of the meditation and the discipline of the movements. For those who adopt the practice, it becomes a way of life.

"I was an atheist before I started this practice. I had no belief in the existence of a higher spiritual life," said Dr. Tracey Zhu, who began the practice in 1997 while doing her internal medicine residency at the Hospital of St. Raphael in New Haven. She was introduced by a friend whose mother saw Falun Gong in a park in China. "I became a calmer person in the face of strife, my interpersonal relationships have improved, I have a better understanding of humanity."

Since its introduction in China 10 years ago, Falun Gong has spread through that country and around the world, with [...] already claiming as many as 100 million practitioners in 40 countries. It is a spiritual practice that focuses on the ideals of truth, compassion and forbearance, [introduced as a form of] ch'igong, the traditional Chinese form of exercise and meditation.

"A Gem Shining Through the Twilight of China," a photo exhibition about Falun Gong, is on display in the Legislative Office Building on Capitol Avenue in Hartford through July 26. Admission is free, and a demonstration of exercises takes place from noon to 1 p.m. daily.

Falun Gong frequently makes news due to the persecution of its [practitioners] in China by President Jiang [...], who is said to be alarmed by the popularity and rapid spread of the movement.

In 1999, the Chinese government [suppressed] Falun Gong [...]. Since then, hundreds have been jailed or forced into labor camps, and many have been killed, according to press reports.

Last week, the BBC World News was suspended from broadcasting in China for several days after broadcasting a news report about Falun Gong. The Chinese government blamed the group for the shutdown, accusing them of sabotage.

The practice of Falun Gong is spread in the United States much the way it is in China - person to person, by word of mouth. [Practitioners] often practice together outdoors, in a manner similar to traditional ch'igong.

"What drew me was their banner that said 'truth, compassion and forbearance,' and I decided to check into it," said Nelson, now a dedicated practitioner who comes to the park most Sundays during the summer. "I picked up the book that day and started reading it, and I couldn't put it down."

The book, "Zhuan Falun," or "The Law Wheel," was written by Li Hongzhi, the founder of Falun Gong. It is a detailed explanation of the elements of the practice. It has tenets that are similar to Buddhism and Taoism, though it attracts members of many different faiths. Falun Gong has no hierarchy.

The spread of Falun Gong also has been helped by the Internet. Beginners can download books free, watch instructional video clips and find local practice sites.

Nelson was seeking direction in her life when she was introduced to the practice, and she now believes she has found what she was looking for.

"I used to drink beer. I quit drinking that day," Nelson said. "And I eventually quit smoking. My whole attitude toward life has changed. Negative things don't affect me any way. And I never get sick either."

Nelson was taught by Shun-Tien "Ted" Lin, who has shown Falun Gong to more than 200 people in Bushnell Park and other locations in the past two years. Lin, who grew up in Taiwan, was introduced to Falun Gong by a co-worker in this country more than five years ago.

Lin said mind cultivation is what makes Falun Gong different from other forms of ch'igong, and what gives it the power to affect health. "We know from acupuncture and traditional Chinese medicine that there are meridians in the body that circulate energy, and disease can occur when energy is trapped and cannot go through the body," he said.

Lin, 40, an engineer at Hamilton Sundstrand, routinely works with complicated concepts, yet he felt challenged to understand the complexities of daily life.

"Before I learned this, I had no idea where I was going," Lin said. "There were so many 'whys' I could not answer. But from reading this book, I understand."

"I was 30 years old, not in good health. I felt very deprived, with little interest in life," said Li, of Storrs.

Last year, she was among a group that walked from Boston to Washington, D.C., to protest the Chinese government's treatment of Falun Gong [practitioners]. "I continue to do the exercise, and my health problems disappeared, I began to feel very powerful. I wanted to introduce other people to it" and to support the people in China who are being persecuted, she said. "The Chinese government is lying, and I can't accept this kind of thing."

Tracey Zhu has, on occasion, introduced the practice to some of her patients. "One man was able to go off his blood pressure medication, and he lost 10 pounds. When he stopped [the practice], his weight came back, and he had to go back to his medication."

The Chinese government has dealt harshly with [practitioners] because it is threatened by a movement that has touched people from many walks of life, Zhu said, adding that the government fears Falun Gong because it encourages ideas and thinking they cannot control.

"The people are well disciplined and well behaved. They [government officials] thought they could easily suppress this, as they did other movements, but the more they did, the stronger the practice became."