At least 205 people are dead, and hundreds more are missing, in catastrophic floods in north-western China which some local reports describe as the worst in the area for more than a century. 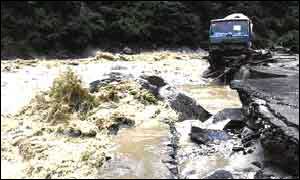 Roads and bridges have been washed away

The area has seen a week of torrential rain, and in the worst affected area - south of the city of Xian - close to half a meter of rain fell in two days, in what is normally an arid part of China.

Rivers that had been dry for years turned into raging torrents, sweeping away roads, destroying tens of thousands of homes, and bringing down a railway bridge in Xian just three minutes after a train crossed it.

A huge rescue operation is under way, including army units specially formed to deal with flood emergencies, but the number of dead is expected to rise.

Some of those swept away by the floodwaters were farmers who had planted their crops in the bottom of dried out riverbeds - taking advantage of three years of drought in the area.

The main east-west railway line linking China's coast to its vast inland provinces has been cut, power supplies have been interrupted, and thousands of acres of farmland are flooded.

The flooding in Shaanxi alone has washed out 13 bridges, 30 kilometers (20 miles) of highways and railway lines and has wrecked 29 hydropower stations, said a spokeswoman for the Shaanxi provincial flood control center.

"Casualties will certainly increase as the investigation continues," the spokeswoman said.

Several provinces have been severely hit by the floods:

And in the northwest region of Xinjiang, rains have destroyed 500 homes and 1,600 hectares (4,000 acres) of cropland, the official Xinhua news agency reported on Wednesday.

China is often crippled by floods in the summer and there are fears that this week's floods could herald a repeat of those in 1998, when more than 300,000 soldiers were mobilized to overcome floods in which at least 2,000 people died.

The government has since taken extra measures to battle the disaster - banning tree felling, forming special army units to combat flooding on major rivers, and pressing ahead with the controversial Three Gorges Dam.

China has been plagued by flooding for centuries, but major floods are becoming more and more frequent - one reason is environmental destruction.

“The Times: A cold shoulder for Falun Gong”