During the formal City Council session on the evening of May 6, 2002, the Mayor of Sarasota issued a proclamation, declaring May 13 to May 19, 2002 as Falun Dafa Week and May 13, 2002 as World Falun Dafa Day in Sarasota. Many people were present at the council meeting. While several practitioners were accepting the proclamation, other practitioners distributed Dafa flyers to each of the attendees, so that they would get a chance to know Falun Dafa. After the presentation, practitioners thanked the Mayor and the City Council for their support. 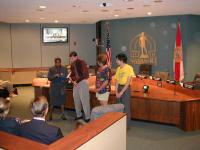 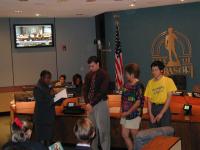 THE CITY OF SARASOTA

WHEREAS, Falun Dafa has grown to be the most popular qigong system in the world, with over one hundred million practitioners in more than fifty countries worldwide; and

WHEREAS, it is based on the principles of truth, compassion, and tolerance where the practitioners learn to let go of negative thoughts, behaviors, and to view conflicts not as difficulties but as opportunities to grow; and

WHEREAS, Falun Gong emphasizes that one must be a better person, a better worker, a better family member, and a better citizen, in order to improve health and to increase wisdom:

NOW, THEREFORE, I, Carolyn J. Mason, Mayor of the City of Sarasota, Florida, on behalf of the City Commission and Citizens of our community do hereby proclaim the week of May 13 -May 19, 2002, as

the tenth Anniversary of Falun Dafa's introduction to the public:

IN WITNESS WHEREOF, I have hereunto set my hand and caused the Seal of the City of Sarasota to be affixed this 30th day of April 2002. 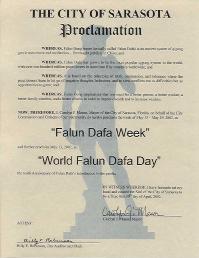