During my visit to Beijing, I reiterated to China's leaders that my Administration and the American people remain firmly committed to the defense of human rights around the world, including the freedom of religion and conscience. The protection of these fundamental freedoms was the central theme of my nationally televised address to the Chinese people.

While in China, senior members of my Administration also expressed concern about several specific cases of unjustified imprisonment with Chinese authorities, urging that the prisoners be freed immediately. We will continue to press the Chinese authorities to end the crackdown on adherents of non-traditional spiritual movements. We have repeatedly stressed to the Chinese Government that there is no justification for its brutal repression of Falun Gong members.

My Administration will continue to work with the Congress to advance the cause of human rights in China. 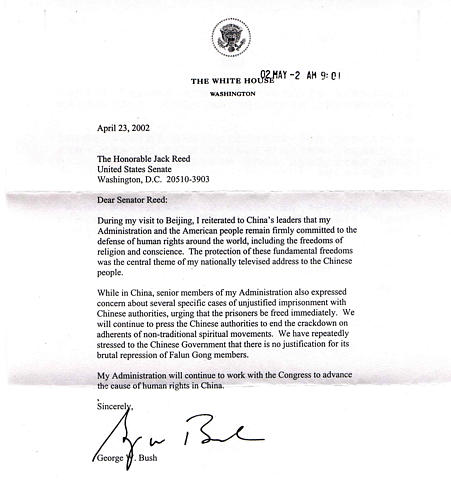 “Some Thoughts about Being One Body”