(Clearwisdom.net) Beginning Tuesday, May 21, 2002, Ms. Zhang Cuiying, an outstanding painter and a Falun Gong practitioner from Sydney, Australia, held three days of exhibitions of her paintings in Boston. On the first day, the exhibit was held in the hall of the state Capitol building. Massachusetts State Representative Mr. Byron Rushing came and gave a welcome speech. On the following two days, the exhibition was held in the central hall of the main building of the well-known Massachusetts Institute of Technology (MIT). Some visitors said that Ms. Zhang's paintings revealed a special serenity and harmony. Major Boston media covered the event. 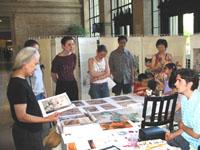 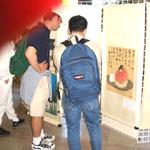 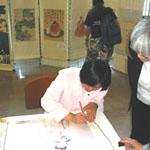 The exhibit was first unveiled in the hall of the state Capitol building. Massachusetts State Representative Mr. Byron Rushing gave a welcome speech at the opening ceremony. He expressed that the state government was honored to have Ms. Zhang's painting exhibition. He also praised Falun Dafa practitioners in America for their righteous and unremitting endeavours in recent years, and stated that the American people and government support Falun Gong and will continue to call on China to stop the persecution. Mr. Rushing said that after the state government of Massachusetts proclaimed Falun Gong and passed a resolution to denounce the persecution, like many other areas, they also received a letter from Jiang's regime in China. The letter accused that, "The American government does not understand the situation in China. China has different ways to handle the practices of different beliefs." Mr. Rushing pointed out that freedom of belief is very important, and it will be a long-term and arduous process to let the majority of people in society understand and implement this principle. The United States has long upheld this position and it has gone through hundreds of years of unremitting endeavours by Roman Catholic, Jewish and other faiths so that everyone can now enjoy freedom of belief in America. He replied that the United States understands the difficulty of changing an old mindset, but the freedom of belief and freedom of speech are the most basic human rights, pointing out that when people have different beliefs and opinions, they should be allowed to speak their mind and maintain their beliefs. He further suggested that this would lead to social stability and diversity, inspiring creativity. He finally encouraged Falun Dafa practitioners to continue with their endeavours in striving for the basic human rights of freedom of belief and freedom of speech.

The painting exhibition was held for the next two days in the central hall of the main building of the Massachusetts Institute of Technology. People from all walks of life came to appreciate Ms. Zhang Cuiying for her fine works.

Some visitors who came on the first day invited their friends to come on the second day. They said that they haven't seen such a wonderful painting exhibition in Boston for a long time. Some people stayed for a long time as they were attracted by the serenity and harmony of the paintings. Some people were amazed by the excellent works and bought many replicas. When visitors learned that the painter used to be confined to a bed because of her illnesses, that Falun Dafa gave her a new life and that "Truthfulness-Compassion-Forbearance" enabled her to upgrade her art, many of them were moved to tears.

In the past year, Ms. Zhang's paintings have been exhibited in more than 70 cities in over 20 countries. Ms. Zhang hopes that people can understand the peacefulness and harmony of Falun Gong and the strength of "Truthfulness-Compassion-Forbearance" through her works. She took the opportunity to thank the American government and people for their support of Falun Gong. At the same time, she wanted to raise awareness of Jiang's regime's ongoing illegal and inhuman persecution against Falun Gong practitioners in China.

Major Boston media including the Boston Globe, Boston Metro and the World Journal covered the event.