Huge Double Aura Around the Sun Appears over the City of Qingdao, Shandong Province (Photos)

(Clearwisdom.net) On the morning of May 23, 2002, a rare double aura appeared over the City of Qingdao, Shandong Province. Around 10:00 a.m., two colorful auras with the same center suddenly appeared around the Sun. The two auras surrounded the Sun like two colorful strips and colors of red, blue, green and purple appeared at times, making the clear sky look spectacular. At 11:10 a.m., the outer aura weakened, and at 12:00 p.m., the double aura disappeared. 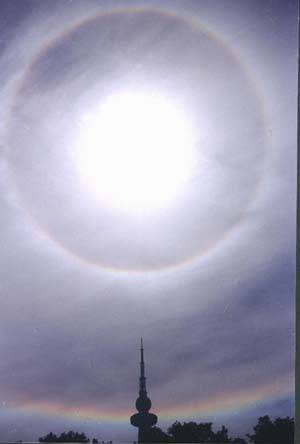