(Clearwisdom.net) In the early morning, May 1 in Changsha and Yueyang cities, Hunan Province, the people who rode the buses were able to see the eye-catching red words on the doors and bodies of the buses, proclaiming: "Falun Dafa is Good." People often read the phrase aloud. Traveling through streets and avenues, the city buses became moving Fa-spreading vehicles. In addition, passengers who got up early could also pick up precious gifts: Falun Dafa truth-clarification booklets or CDs. Although the words were eventually erased , they nonetheless effectively shook the evil. [Note: Without access to any typical means of communication such as newspapers, magazines, TVáor radio, Falun Gong practitioners have resorted to many creative and sometimes unusual methods for raising awareness among Chinese people about the persecution.] 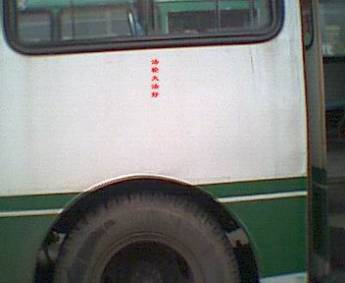