Successful Rescue of Zhao Ming from a Labour Camp in China

Only when a man looks into the abyss and can't see the bottom does he discover his character. Zhao Ming has survived his 22 months in the abyss of a Chinese labour camp and now he has returned to Ireland to tell his story.

"I am very grateful to the people of Ireland, the government and the media for helping me to return to Ireland," said Zhao Ming on his return from China from detention in Tuanhe Labour Camp in the Chinese capital Beijing. "It is a great feeling to have regained my freedom" continued Ming, "and I am very happy to see my friends and colleagues again."

Zhao Ming graduated from the Computer Science Department of Tsinghua University in 1993 and afterwards worked for Tsinghua Unisplendour Group as a network engineer, department manager and project leader for many years. In March 1999, he was admitted to the Computer Science Department at the Trinity College in Dublin to pursue his Masters degree. In addition to studying in the Networks and Telecommunications Research Group (NTSG) and tutoring undergraduates, with the help of the D.U. Meditation Society he arranged for Falun Gong practice in Trinity. Ming started to practice Falun Gong in 1994 and had attended Mr. Li Hongzhi's lectures in Dalian, Liaoning Province. Before he practiced Falun Dafa, his health was so poor that, at times, he could not even work. Shortly after practicing Falun Dafa, he became completely healthy and full of energy. As a person who had greatly benefited from Falun Dafa, he spent his spare time actively promoting Falun Dafa and assisted other practitioners in Tsinghua University before he went to Ireland.

In January 2000, when he went home for the holidays during Christmas break, he was captured afteráfiling a complaint against the government policy on Falun Gong and placed under house arrest. Indications are that he was arrested because of his religious beliefs and that the Chinese government then pressured him to write a confession agreeing not to complain about human rights violations in Chinaáagain. According to an article in the Irish Times, it appears that Ming broke house arrest to attend a rally in Tiananmen Square, evaded capture by the Chinese police, and went into hiding somewhere in China. His whereabouts were unknown through the summer. We have since learned that Ming had been detained without trial by the Chinese government in Tuanhe Farm Labour Camp near Beijingásince May 2000.

In the spring of 2001, Zhao Ming was transferred from Beijing Tuanhe Labour Camp to Beijing Xi'an Labour Camp, where he was forced to go through brainwashing sessions. On April 25, Ming was moved to the 4th Brigade. Under command of the Commander Li of the Brigade, they tormented Zhao Ming physically and mentally by means of swearing, slapping, deprivation of sleep, etc. For more than ten days, however, they still failed to transform him. Then Ming was imprisoned and forced to stand still without the slightest movement for as long as 18 hours a day. After three days of such ill-treatments, Ming became swollen all over his body. Later on Ming was ordered to clear rubbish bins, he had to carry out the task by himself that was usually done by four or five people, and when he went back to the cell after work, he was forced to stand absolutely still for long periods of time. During that period, Ming was only fed with plain corn bread, salted vegetables and plain water.

On May 12, 2001, Ming's one-year illegal labour camp term was completed, but it was extended for another 10 months just because Ming would not renounce Falun Gong.

On March 12, 2002, Ming was finally released from the labour camp and allowed return to his family. On March 22, 2002, he returned safely to Dublin to re-start his life in Ireland.

Notes on Friends of Zhao Ming:

The Friends of Zhao Ming (FOZM) is a group involved in lobbying both Irish and Chinese Governments to obtain the official release of Zhao Ming by the Chinese government as well as his return to Ireland to continue his studies at Trinity College Dublin. The FOZM group was set up in March 2000 as an umbrella group to help co-ordinate the great work publicizing Ming's case by the Trinity G.S.U. and others. Our membership consisted of Trinity Graduate Student's Union (G.S.U.) officers, Amnesty Ireland members, Trinity College Computer Science students and lecturers, Falun Gong practitioners, members of D.U. Meditation Society and students at second level schools.

Trinity College Dublin Students' Union has today welcomed the return of Trinity student Zhao Ming to Ireland. For the past two years, TCDSU has joined with groups such as the Friends of Zhao Ming and Trinity's Graduate Students' Union highlight Ming's plight and to campaign at the highest levels of for his release.

Ming's fellow students never lost hope in the campaign to see him released. Even though they were against one of the world's most powerful nations, Ming's friends and supporters refused to allow his case to drop from the national and international stage. His plight touched the students of Trinity, and they responded by taking to the streets on numerous protests and engaging in massive letter writing campaigns.

TCDSU would also like to thank all those who gave their support to this campaign especially Lord Moyne, Trinity's Provost John Hegarty, Amnesty International and Ming's many friends and colleagues in the practice of Falun Gong.

Ming's release and joyful return to Ireland should be beacon to all those who campaign against oppression and injustice. The tireless and ultimately successful work done by all of Ming's supporters shows that no matter what the odds, if the cause is worth fighting for then you should never give up. 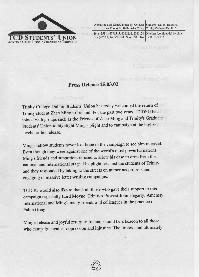 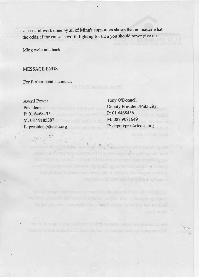 FOZM and Trinity's G.S.U. organized a letter writing campaign on 10/4/01 at Trinity College Dublin and collected over 2000 signed letters from students petitioning the Minister for Foreign Affairs Brian Cowen T.D., the Chinese Ambassador to Ireland, the Premier of the People's Republic of China Zhu Rongji Zongli and the head of Tuanhe Labour Camp where Ming is currently being held.

On Friday 27th April FOZM, in conjunction with Amnesty Trinity and Trinity Student's Union, organized a "March for Ming" to the Dept. of Foreign Affairs at St. Stephen's Green. Over one hundred and twenty students participated in the march from Trinity College to Iveagh House where six hundred letters and two 5' x 5' signed petitions were delivered to the Office of the Minister for Foreign Affairs.

Announcement of release of Zhao Ming on March 12th.

Return of Zhao Ming to Dublin, Ireland to continue his life as a student at Trinity College Dublin.