Whereas, a great state is only as great as those institutions that perform exemplary service on behalf of their community, whether through unique achievement in professional or other endeavors, or simply through a lifetime of good citizenship; and

Whereas, Falun Dafa, also known as Falun Gong, was introduced to the world by Li Hongzhi in 1992; and

Whereas, today, more than 100 million people in more than 54 countries practice Falun Dafa to turn away from drugs, alcohol and violence; and

To practice its core principles of Truth, Compassion And Tolerance; and

Whereas, since 1999, the Chinese government has engaged in a crackdown on Falun Dafa; and

Whereas, Chinese practitioners of Falun Dafa continue to follow their non-violent means of expression; and

Whereas, the role of Falun Dafa and its core principles are needed now more than ever after the attacks of September 11, 2001; and

Whereas, the journey of Falun Dafa photo exhibition has come to the empire state plaza this morning, April. 15, 2002; and

Whereas, this exhibition has been shown in countries across North America, Asia, and Europe; and

Whereas, this exhibition will enable the public to better understand the origins and benefits of this practice; now, therefore, be it

Resolved, that I, state senator Neil D. Breslin, recognize the spiritual, mental and physical benefits of Falun Dafa; and be it further

Resolved, that I, state senator Neil D. Breslin, issue this proclamation in honor of Falun Dafa week, April 15-21, 2002; and be it further

Resolved, that a copy of this proclamation be transmitted to Falun Dafa practitioners throughout the county of Albany.

Dated: April 15, 2002
In witness Whereof, I have hereunto
Set my hand and signature 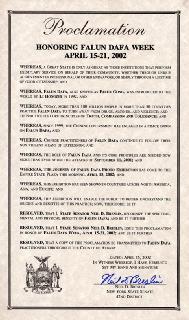