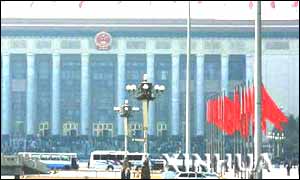 (BBC photo: The protest occurred only 200 meters away from the Great Hall of the People, where the Chinese People's Congress was in session.)

On Thursday, March 07, 2002, at least four western Falun Gong practitioners were arrested in Beijing. Before being arrested, they held a brief protest while the Chinese People's Congress was in session.

BBC reported on March 7, 2002 that according to a spokesperson of Falun Gong in New York, the arrested practitioners were all Australian. This protest happened in front of the huge portrait of Mao Zedong hanging from the Tiananmen gate.

According to the report, the Chinese policemen seemed to be unprepared for someone protesting under Mao's portrait. Under the "watch" of this former leader of the Party, these westerners briefly unfurled a banner. Plainclothes and uniformed policemen tore the banner away from the practitioners quickly. However, they continued shouting for a few minutes. Later on, the policemen moved a police vehicle, pushed the protesters in and drove away. About 200 meters away from the location where the protest occurred, congressional representatives from all over China were having the annual People's Congress Conference in the Great Hall of the People.