Spreading the Fa and Truth-Clarification at the Chinese New Year Party in Ottawa, Canada

At a Chinese New Year party on February 9, 2002, Falun Gong practitioners and local Chinese residents gathered again to commemorate the first anniversary of "Ottawa Falun Dafa Day." In order to better clarify the truth and spread the Fa to the local Chinese people, practitioners had done a lot of preparation, designing and printing many greeting cards and banners, and creating a photo exhibit called "The Path of Fa-Rectification." 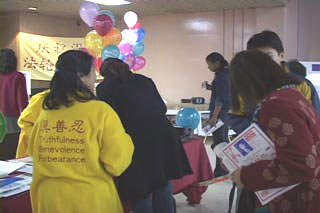 Beginning at 11:00 a.m., many local Chinese residents arrived at the Ottawa City Exhibition Hall to see the exhibit and watch the entertainment. As they approached our exhibition booth, the first thing greeting them was a large, eye-catching banner bearing the words, "Falun Dafa." These few characters in Chinese made our booth distinctly notable. The photo exhibit, "The Path of Fa-Rectification," used professional quality photos to display how Falun Dafa has proliferated worldwide since it was first made public in 1992. It also demonstrated that in this very touching historical moment, the practitioners in China have not yielded to the evil forces and have firmly adhered to the universal principles of "Truthfulness, Compassion, Forbearance." A television playing beside the photo exhibit showed, "The Song of Life," "The Truth of the Self-immolation in Tiananmen Square," "The Truth of the April 25 Event," "SOS Walks - Urgently Rescue Falun Gong Practitioners Who Are Being Persecuted" and others. Smiling practitioners, maintaining the purest of hearts, distributed the most beautiful spring celebration gifts to passers-by in the Year 2002 celebration. Practitioners created many of the gifts themselves, including New Year's calendars, Falun Gong truth-clarifying materials and videotapes. The people receiving the presents seemed to have felt this beauty, and everyone expressed their gratitude to the practitioners.

An older Chinese gentleman was very angry about the persecution against Falun Gong by the Jiang regime. He told us that he had written an article to the local Chinese newspaper condemning the Chinese regime's persecution of Falun Dafa. Later on, a few other Chinese residents told us that they had read the Falun Dafa books before and thought they were very good, but they had not adhered to the practice for various reasons. After seeing our exhibit, however, they inquired about how to learn more. When a Canadian was viewing our photo exhibition, he especially liked the photo of "The Egg with the Handle." After a practitioner told him the miraculous story behind the photo, he gave a deep sigh and exclaimed, "This is a real miracle!"

A middle-aged lady came to our booth and happily announced, "Falun Dafa is what I've been looking for." After seeing all the photos, she asked how she could learn Falun Dafa and took a copy of the free Chinese flyers and a set of videotapes. When the activity was winding down, just before 7:00 p.m., she came back to our booth and told us that she had given the truth-clarifying flyers to one of her friends and now wanted to take some more with her to share with other friends. So we selected several sets of publications and videotapes for her, and she left feeling quite pleased.

We see more and more Chinese people coming to know the truth, and showing their understanding and support of Falun Dafa. We truly feel that springtime is getting closer and closer. 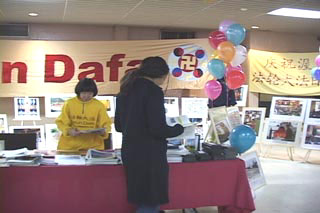 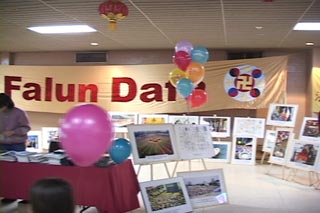 “Harbin City Practitioners Kidnapped One After Another”