Office of the United States Trade Representative: The steps the Chinese government has taken to restrict the freedom of thought, conscience and belief are disturbing

Executive Office of The President

I am writing in response to your letter to the United States Trade Representative Robert Zoellick concerning the treatment of Falun Gong practitioners by the People's Republic of China.

The United States Government has raised its concern over China's treatment of the Falun Gong repeatedly with the Chinese authorities both in Washington and Beijing, and will continue to do so. We have also voiced our concern about the numerous reports of the torture and deaths of Falun Gong practitioners in custody. While the U.S. Government takes no position on the beliefs and practices of Falun Gong, we have made clear on numerous occasions our strong opposition to the detention of individuals solely for peaceful associations and assembly. The steps the Chinese government has taken to restrict the freedom of thought, conscience and belief are disturbing. These rights are protected by such international instruments as the International Covenant on Civil and Political Rights.

The U.S. Government will continue to raise these issues with the Chinese government through diplomatic channels, in addition to making our position clear in public statements. For example, the State Department documented our concern over the mistreatment of Falun Gong practitioners in its annual country report on human rights practices and international religious freedom. (These reports can be found on the State Department website: www.state.gov.)

Thank you for bringing this important matter to our attention. 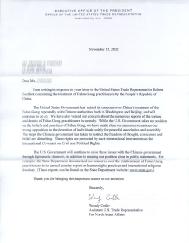