Many people would find it beyond belief that a government would pay a woman to set herself on fire, murder her, and use her death to frame and incite hatred against an innocent group of its own people.

This is what happened in the Chinese novel, "Yellow Disaster," (Huang Huo), a book published in China for over ten years and one that appeared on Chinese government controlled publishing websites. Mysteriously this book was stripped of its publishing status in China and removed from Chinese websites shortly after January 23, 2001. That was the day Chinese state media reported that 7 people set themselves on fire, that one woman died and that all of 7 people had set themselves on fire because they practice Falun Gong. The gruesome footage was broadcast ceaselessly by state media in China and was distributed worldwide. It has been used as the biggest propaganda tool by the PRC head Jiang to justify his persecution of Falun Gong practitioners in China.

It is because of my love for China and Chinese people that I want people to know the truth. More than one billion Chinese people are deceived into hating an innocent group of their fellow countrymen. The self-immolation is staged. Falun Gong is good. It is a practice that improves people's health and teaches them to be good people, following the universal principles of truthfulness, compassion and forbearance. I want Chinese people to know the truth so that they will not be deceived into participating in or supporting this enormous injustice.

There are many problems with the Chinese Government's claims. First of all, Falun Gong's teachings forbid killing and regard suicide as a form of killing. Mr. Li Hongzhi, the founder of Falun Gong, has explicitly stated that suicide is a sin. In addition, according to a Feb. 6th, 2001, article in the Washington Post, at least one of the alleged participants in the self-immolations was known to not have any association with Falun Gong whatsoever. After publication of this article, the Washington Post reporter returned to the alleged participant's hometown to do further investigation and was arrested by Chinese authorities. No independent journalists were able to meet or speak with the survivors of the self-immolations until over a year later, while Chinese state-run media appear to have unlimited access to conduct interviews.

Several Chinese State-run newspapers said that the close-up shots in the video were taken from a videotape confiscated from CNN. However, CNN states that this is not their footage, as their cameraman was arrested and taken away before he had a chance to film anything.

In February 2001, Falun Gong supporters in the United States issued a video deconstruction of CCTV's self-immolation video footage, identifying sections of the footage that cast doubt upon the story being told by the Chinese Communist propaganda. Shortly thereafter, these sections of the self-immolation footage were removed from virtually all Chinese state-run propaganda shows. Also, after viewing the deconstruction video, one reporter wrote in an article that appeared in the Boston Globe on April 18th, 2001, "...it appears that Liu Chunling, one of two people who died, collapsed not from the flames but from being bludgeoned by a man in a military overcoat. Falun Gong members identified the man as a police officer."

In February of this year my twin brother built up the courage to go to China and held a press conference in Beijing with foreign media to reveal this deconstruction video. Then he went to Tiananmen Square and held up a banner that said that Falun Dafa is good and the self-immolation is a hoax. For this he was violently dragged away, detained in a filthy cell, abused, denied food, and deported within a day. My dear Chinese friends, I want you to know the truth. Please watch the video for yourself at: http://www.faluninfo.net/devstories/tiananmen/immolation.asp

The New York Times February 7 article "China Steps Up War on..." observes that there are those inside China who are also becoming increasingly skeptical: "China's already shrill campaign to discredit the Falun Gong: In the last week, the campaign has shifted into overdrive. Trying to capitalize on public shock over the attempted self-immolation...on Jan. 23, which left one woman dead and four others, including a 12-year-old girl, severely burned, the authorities have resorted to tried Communist methods...." 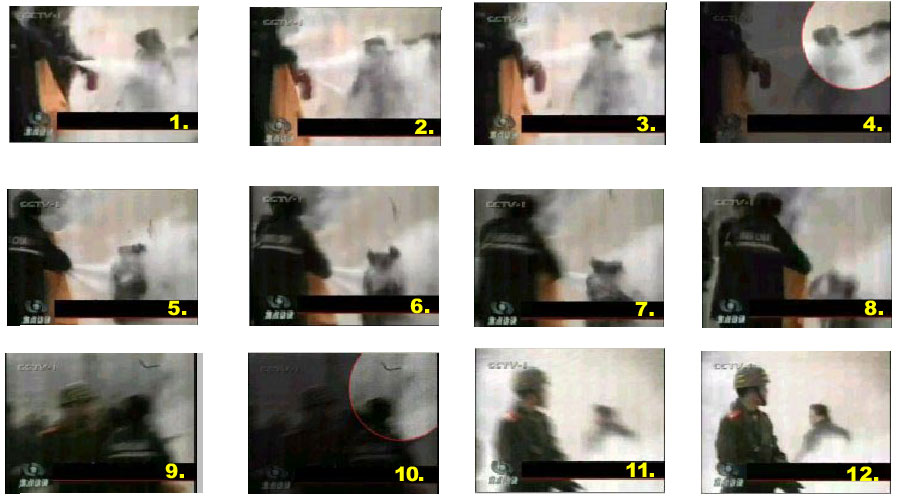 On January 23rd, 2001, this footage was captured as it was reported that five people set themselves on fire in Tiananmen Square, Beijing, China to protest Chinese persecution of Falun Gong, however, Western scrutiny of the event is causing belief that the event was staged by the Chinese government.

In China, all of the Falun Gong books, exercise tapes and materials are subjected to be confiscated and destroyed.

In Canada, it is not allowed to defame and discredit people at will. The Canadian Broadcast Standards Council (CBSC) released a decision on August 16, 2002 -- the first from a Canadian regulatory body -- against the airing of propaganda attacking Falun Gong on television in Canada (Link to Decision: http://www.cbsc.ca/english/decision/020816.htm). They explained that, "...it is nothing more or less than a biased attack on Falun Gong by the producer of that news item...The Council has found that the news item relating to murders committed in Mainland China was unfair and improper in its method of linking the murderer to Falun Gong." Cindy Gu, a Falun Gong practitioner from Toronto, feels that this decision is significant, "This demonstrates that the lies and hate propaganda considered normal daily news in China is seen as violating numerous codes of journalistic ethics in Canada and will not be tolerated in Canada."

In order to block positive reports about Falun Gong that are being published in numerous countries outside of China, the Chinese government has attempted to stop the Chinese citizens from accessing any foreign information that has not been approved by the Chinese regime. "It's not a pretty picture. Political dissent, the Tiananmen Square massacre and the Falun Gong movement are blocked, among other topics. A cyber-cafe, the closest thing to a town hall meeting in China, can be shut down for violations. AltaVista and Google, two popular search engines, found their sites hamstrung by Chinese officialdom. Using software, some of it American, and filters, Beijing has blacked out the Internet links and jarring opinions it doesn't want its people to see." (San Francisco Chronicle, September 19, 2002)

In an article published in Comment Max on September 19, 2002 it said, "They are moving all foreign television channels to a single encrypted broadcast satellite, according to the Jamestown Institute. This simplifies their ability to censor foreign broadcasts...Internet surfers in China can still use Sina.com, a more politically correct search engine that Chinese censors approved. But Sina.com isn't as powerful and doesn't lead Web surfers to Falun Gong sites that accuse President Jiang Zemin of murdering its followers."

In China, access to the outside world is difficult. To have the freedom to hear the truth is limited. My dear Chinese friends, now that you are outside of China you have a chance to hear the truth. Please take it.

“Cases of Immediate Karmic Retribution in this Lifetime Across China”