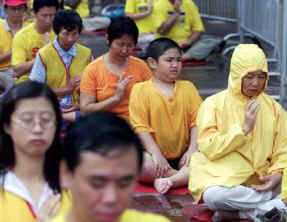 Falun Gong [practitioners] meditate during a protest outside the Hong Kong Convention and Exhibition Centre, site of the official Chinese National Day celebrations, in Hong Kong October 1, 2002. About one hundred Falun Gong [practitioners] staged a silent sit-down protest against China's [persecution] of the movement and a planned local anti-subversion law which they feared would extend such persecution to Hong Kong. The planned law, unveiled last week, has raised concerns it could be used against anyone whom China or Hong Kong's Beijing-backed government finds objectionable, such as political dissidents and Falun Gong adherents. REUTERS/Kin Cheung