A Practitioner of Falun Gong, a Chinese exercise and meditation technique, holds a position during exercises at Desert Breeze Park. 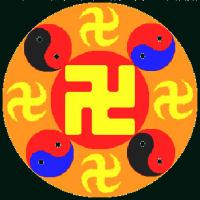 The Law Wheel of the Buddha School, the Yin-Yang of the Tao School and the ten-directional world are all reflected in the Falun Law Wheel.

Laili Ng, left, Kelly Sun, right, and other Falun Gong followers do a series of exercises in front of the Desert Breeze Park Community Center. The Chinese government initially promoted the slow-motion meditation exercise but banned them in 1999 when they perceived the large popularity of the movement as a threat, said local spokesman Kaijin Liang.