Shocked by the recent mass killing in Changzilin Labor Camp in Heilongjiang Province, at 10 am on July 13th, Vancouver practitioners held an urgent press conference in front of the Chinese consulate. Practitioners appealed to media and the public to pay attention to the tragedy and extend their support to stop the killing of Falun Gong practitioners.

More than 10 Local Vancouver English and Chinese media attended the press conference. Among them, the major media CBC, CKNW and National Post interviewed a practitioner who is doing a 24-hour sit-in in front of the Chinese Consulate. 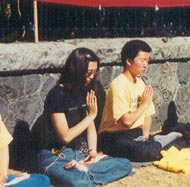 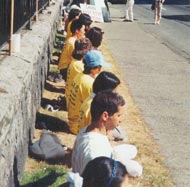 2. Baltimore Practitioners Appeal for Urgent Support and a Stop to the Killing

On July 8th, practitioners from Washington DC, Virginia and Baltimore gathered at Inner Harbour in Baltimore and had a group practice and truth clarification activities.