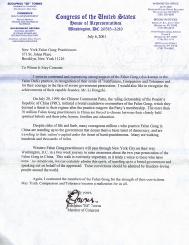 I write to commend and express my strong support of the Falun Gong (also known as the Falun Dafa) practice, in recognition of their credo of Truthfulness, Compassion and Tolerance and for their courage in the face of severe government persecution. I would also like to recognize the achievements of their capable founder, Mr. Li Hongzhi.

On July 20, 1999, the Chinese Communist Party, the ruling dictatorship of the People's Republic of China (PRC), initiated a brutal crackdown on members of the Falun Gong, which they deemed a threat to their regime after the practice outgrew the Party's membership. The more than 70 million Falun Gong practitioners in China are forced to choose between their closely held spiritual beliefs and their jobs, homes, families and education.

Despite risks of life and limb, many courageous millions who practice Falun Gong in China are standing up to the government that denies them a basic tenet of democracy, and are traveling to their nation's capital under the threat of harsh punishments. Many are walking hundreds and thousands of miles.

Western Falun Gong practitioners will pass through New York City on their way Washington, D.C. in a two week journey to raise awareness about the two year persecution of the Falun Gong in China. This walk is extremely important, as it lends a voice to those who have none. As Americans, we can certainly admire this spirit, of standing up to a brutal government and speaking up on behalf of the oppressed. These convictions should be admired by freedom-loving people around the world.

Again, I commend the members of the Falun Gong for the strength of their convictions. May Truth, Compassion and Tolerance become a realization for us all.