Photo Report: A Call for Justice on Tiananmen Square 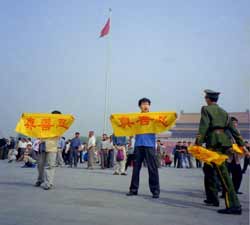 However, the most precious principle in the hearts of those Falun Gong practitioners is "Zhen-Shan-Ren." In order to uphold "Zhen-Shan-Ren" and let more of the world's people know the truth, many practitioners went to Tiananmen Square, because there is not a single place in China where their right to speak out peacefully is protected by law.

The history of China has recorded what happened in Tiananmen Square on May 13, 2001. What the bright banners manifested to the people is the essence of Falun Gong. What they are crying out, I believe, are those precious words that they most want to tell people: "Falun Dafa is Good!"

These practitioners cherished righteous thoughts and upheld righteous actions. Where are they now?

“"These Crimes Must Be Stopped:" Swedish Practitioners in Gothenburg and Stockholm Expose the Evil”