With the company of Germany practitioners, I arrived at Hamburg today and met a senior reporter of a large news media there. He was pleased to see us and entertained us with tea and refreshments. He said in fluent Chinese, "It has special meaning that today you come to Germany to tell us your experience of persecution in China." After German Chancellor Gerhard Schroeder met Chinese Prime Minister Zhu Rongji, the reporter was eager to know whether the German Chancellor discussed human rights issues with his Chinese counterpart using diplomatic language or was really condemning the Chinese government's trampling of human rights with an intention to solve current China's human rights problem, especially the persecution against Falun Gong.

Last year he talked about Falun Gong with ordinary people in Beijing, they said, "Falun Gong teaches people to follow the principle of Truthfulness, Compassion, and Forbearance. It should be protected by the government and carried forward. It should never be suppressed and persecuted." A taxi driver told him, "My mother-in-law became healthy after practicing Falun Gong. Falun Gong is great!"

As soon as we gave him an invitation letter, he said he would be present. It rained heavily in the evening. However, he managed to come and we were touched. He highly praised my diversified art styles, especially my two large paintings of 3 meters (about 9 ft) long and half a meter (about 1.5 ft) wide. He was moved by our inner beauty, harmony, and serenity. He specially interviewed the practitioner in charge of the local Falun Dafa Association for over two hours. To write a righteous and fair report, he stayed and talked with us for five hours.

Local Chinese newspapers and radio stations interviewed us over the phone, and wanted to report on the exhibition and the truth of the persecution against Falun Gong practitioners in China. 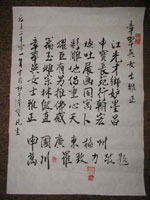 An elder Chinese gentleman came by taxi to attend the opening ceremony after he saw the roadside advertisement of my painting exhibition. He specially wrote a poem to praise my artistic accomplishments and my righteous personality of insisting on truth by not bending to political power. 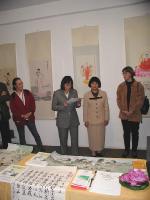 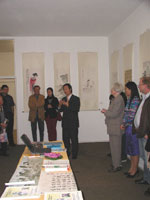 After seeing the painting exhibition, people said one after another, "Beautiful paintings, kind Falun Gong practitioners, and a terrible Jiang Zemin government."