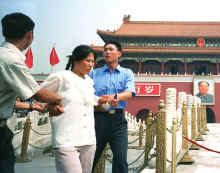 The centre said the seven, from different provinces around China, had died from abuse in custody spanning hard labour, torture and beatings.

One follower died after police pushed him down four flights of stairs, the centre said in a statement seen late on Tuesday.

China banned Falun Gong in 1999, branding it an "[Jiang Zemin government's slanderous term omitted]", after the [...] group shocked leaders with a mass protest around the Zhongnanhai leadership compound in Beijing demanding official recognition of their movement.

Last week, 35 foreign followers unfurled a banner in Tiananmen Square to protest against the "violence and terror" inflicted on Falun Gong followers in China. The foreigners were deported the following day.

Falun Gong has said more than 50,000 adherents have been sent to prisons, labour camps and mental hospitals in China since it was banned.

Chinese authorities have acknowledged several deaths of Falun Gong members in custody, but say most resulted from suicide or illness.