Practitioners expressed sincere appreciation for the support. They thought the gentleman might be the mayor's secretary, so they politely asked to have his business card. The gentleman jokingly pointed to the elegantly wrapped letter and said, "Oh, my name is on the letter." Practitioners all smiled realizing that it was the mayor himself who had personally delivered the letter.

The practitioners were even more moved by the mayor's righteous action when they learned that it was this mayor who had issued a proclamation for Falun Dafa Week during the past spring festival. Since then he has received many attacking and slanderous materials from Chinese government agencies in Canada.

Practitioners with compassionate hearts have been clarifying the truth to Canadian government officials and citizens. This letter is another proof of the willingness to uphold justice after people get to know the truth of Dafa. 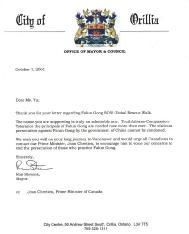