On July 3 to 4, 2009, Falun Gong practitioners in Ohio took part in three Independence Day parades held in Columbus and Dayton. The colorful float, practitioners in traditional Chinese costumes, and elegant exercise demonstration were warmly received by spectators on the parade route. 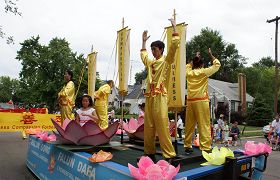 Demonstration of five sets of exercises on the float 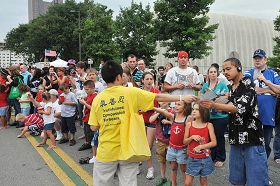 The colorful Falun Gong contingent participated in the parade as the only group of Asian descent, and brought the magnificence of Falun Gong to tens of thousands of spectators on the parade route. The spectators applauded and cheered. At the parade in Dayton, many people asked about where they can learn Falun Gong. Falun Gong flyers exposing the persecution happening in China were distributed to spectators. A spectator in Dayton said, "I know the Chinese Communist regime suppresses Falun Gong, but you are here taking part in the parade, it's fantastic! Bless you!"