Chen Jinyin is 81 but looks like he is only 50 or 60. He gets up early every morning, takes his digital music player, and rides his motorcycle to Jiayi Park where he plays the Falun Gong exercise music and does the exercises with other Falun Gong practitioners.

He gets up shortly after four every morning. After doing the exercises in the park, he studies the book Zhuan Falun, written by Master Li, with other practitioners. When he returns home it is after nine a.m. Every day, practitioners perform the Falun Gong exercises in parks all over the world. Mr. Chen has been doing this daily routine for over five years now. 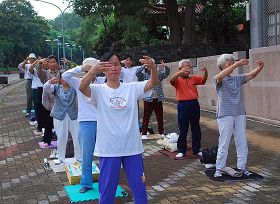 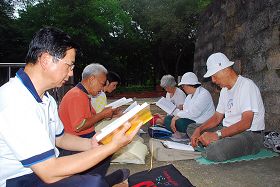 After the exercises practitioners study the Fa in the park

Mr. Chen is an old man. He has a happy family. When asked why he gets up so early and goes to the park to do the exercises, he replied, "For over a decade I had a stomach problem. After only a few months of Falun Gong practice, this illness went away. It was a miracle, just like it says in Zhuan Falun. I didn't notice the exact date that I no longer had any illness."

He had diarrhea for over 10 years and had to be very careful about when ate. He said, "One day I went with a fellow practitioner on business and he was hungry and wanted to eat something. I had to keep him company, but I was also concerned about the effect on my bowels. Surprisingly, nothing happened. That was in the early years of my practice. I truly felt the power of Falun Gong."

After years of practice, Mr. Chen experienced the wonders of Falun Gong and has traveled to New York, Washington, Malaysia, Hong Kong, and Japan to spread the truth about Falun Gong and the Chinese Communist Party's (CCP) persecution of the practice in China.

Mr. Chen Yuancan was a senior staff member in the tax office in Jiayi City. He is close to 80 years old and has retired. His wife, Wu Bihua, was a senior staff member with the Zhonghua Telecommunications Company and is also retired. They started practicing Falun Gong five years ago, and now his high cholesterol and her high blood pressure are gone.

Speaking of how he came across Falun Gong practice, Mr. Chen Yuancan said, "Five years ago a friend of mine told me that there would be a seminar about Falun Gong at Lantan Elementary School and that I should bring my wife along. Coincidentally, on the same day, a Falun Gong practitioner told my wife about this course and asked her to ask me to come along. As a result we both went."

A few months later Mr. Chen and his wife Wu Bihua went with fellow practitioners to Alishan to introduce Falun Gong to the tourists there. " The first time I went to Alishan, while we were taking a break, I felt dizzy. I hadn't felt this way in the past. I knew Master was purifying my body," said Ms. Wu.

After returning from the New York Fa conference, Wu Bihua felt very good for several days. She understood the relationship between getting sick, taking medicine, and a practitioner's body being purified. She discussed this with her husband and decided to stop taking medication. In the beginning their children were worried and called them regularly to emphasize the danger of not taking medicine. "We placed our complete confidence in Dafa and followed Master Li's teaching. We did not think about our illnesses and just focused on our practice. Five years have passed and we don't experience any ill effects due to high cholesterol or high blood pressure," said Wu Bihua.

There is a story behind everyone who practices Falun Gong in Jiayi Park. There is an 84-year-old lady who suffered from bone spurs. After just 20 days of practice, the abnormalities disappeared. She didn't need to have surgery. Discussing her condition, she said happily, "It was miraculous that I recovered so quickly."

Chen Jinyin indicated that many of his fellow practitioners not only enjoy good health, but their thinking has also elevated. After performing the exercises he always advises those who can, to stay and study the "Fa."

He said, "Dafa is very profound. Only through understanding the Fa can one advance in levels."

“Mr. Li Hui and His Wife Illegally Detained, Their Children Threatened for Requesting the Couple's Release”