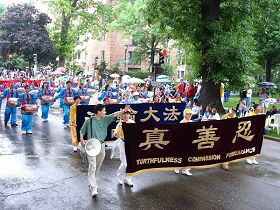 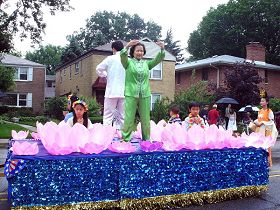 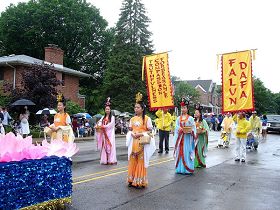 The Evanston Independence Day Parade has eighty-eight years of history, and was evaluated as the third largest "Independence Day" parade in the U.S. in 2001 by the magazine Country Home, second only to Washington DC and Boston. The unique feature of the Evanston Independence Day Parade, as the Country Home article commented, is that it is entirely organized by volunteers and the source of funds comes from donations by individuals or companies. Although the parade is entirely organized by non-governmental organizations, its influence in society cannot be ignored. In 2004, when Barack Obama was a state representative in Illinois, he also took part in the parade to run for US Senator.

The parade moved along Central Street, the main street, and continued for three miles. The Falun Gong contingent was the only entry that included Chinese people among 123 entries. The local residents are already quite familiar with the group, and they applauded as soon as they heard the drumbeats of the Tang drums and saw the bright flags bearing the words, "Falun Dafa." Several spectators waved and shouted, "Falun Gong!"

“Before and After Practicing Falun Gong”