(Clearwisdom.net) At 12:30 a.m. on July 5, the 8th Shen Yun Performing Arts show in Buenos Aires concluded, and audience members walked out the theater with smiles of satisfaction. Many were still chatting about the show and lingered around long after the curtain fell. 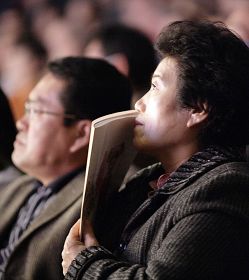 Mr. Gu is from Shanghai and he saw the show on July 1. He came back again on July 4 and told the reporter that he loved all the programs. "The show is really a spectacular, the costumes are beautiful, the music is very good and classical," said Mr. Gu.

After the show, Mr. Chen Zekun was very excited and repeated a comment four times with emotion: "The show was astonishing!" He said that he immigrated to Argentina decades ago from Hong Kong and had never seen such a spectacular show. "We sincerely thank the performers of Shen Yun for their hard work and dedication."

During the intermission, Mr. Lu from Taiwan commented that he was deeply touched by the show, especially by the piece "Heaven Awaits Us Despite Persecution" which portrayed a Falun Gong practitioner's experience during the persecution in China.

"It [the persecution] should not have happened... I love the music of the show, and all the performers were very dedicated and performing wholeheartedly. This is probably why the show is so moving."

His wife loved the dancing and music. The couple said that their son saw the show on June 29, as they bought 10 tickets for their son and his friends. They all loved the show.

Ms. Huang is from Malaysia and she gave high marks to the show: "The dancing was marvelous, the backdrops were very creative, and the costumes were definitely the best."