(Clearwisdom.net) On July 4, 2009, local Falun Gong practitioners participated in the 19th Ann Arbor Independence Day Parade which was hosted by the Ann Arbor Jaycees. The parade is one of the major summer events in this renowned college town. 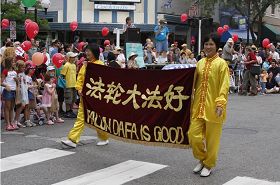 Ann Arbor is the home of the University of Michigan, a renowned university. The city is ranked among the top ten best cities to live in the US and it has many Chinese immigrants. On December 9, 2000, Mr. Li Hongzi, founder of Falun Dafa, lectured to a Falun Dafa experience sharing conference here.

The practitioners' group was led by a gigantic "Falun Dafa" banner which was followed by three practitioners who held the Chinese characters Truthfulness-Compassion-Forbearance, the principles of the practice. Following them was a float with 2 practitioners demonstrating the exercises.

Another group followed behind the float displaying "Falun Dafa" and "Truthfulness-Compassion-Forbearance" flags. While hoisting the flags high and upright, the practitioners waved to the spectators.