(Clearwisdom.net) On the afternoon of June 27, 2009, the annual Brighton and Hove International Festival of Sport was held in Preston Park in Brighton, Great Britain. This year over eighty groups took part in the festival, including a number of different fitness activities and exercise demonstrations. The event drew a large number of visitors. Falun Gong practitioners received an invitation to take part in the event, and their exercise demonstration was warmly welcomed. 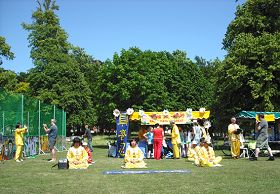 Falun Gong practitioners demonstrated the exercises at the Brighton and Hove Festival of Sport, attracting many people to inquire about the practice.

On the green lawn, Falun Gong practitioners' beautiful golden yellow outfits shone in the sun. Accompanied by the exercise music, practitioners demonstrated the "gradual, slow and round" exercises of Falun Gong. Under the green trees and blue sky, many people paused and quietly watched. Many sat on the lawn nearby, enjoying the peaceful scene. Some visitors learned the exercises at the event, and some enquired about local Falun Gong practice sites. Children were fascinated by the elegant paper lotus flowers that the practitioners made, and all wanted to bring one home.

People accepted the informational flyers from the practitioners, and learned what Falun Gong is and also heard about the brutality of the Chinese Communist Party's (CCP) persecution of Falun Gong. Many learned the exercises and many people said that they could not comprehend how the CCP could ruthlessly persecute a peaceful group such as this. To express their support for justice, many people signed the petition condemning the CCP's persecution of Falun Gong. In a short few hours, about 450 signatures were collected.

Even when the event was about to end, people were still coming over to enquire about the local practice site, eager for the opportunity to practice Falun Gong.