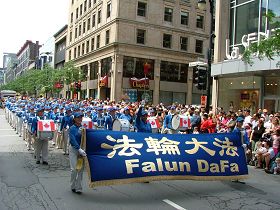 The Divine Land Marching Band is composed of more than one hundred Falun Gong practitioners from New York and Montreal. Dressed in blue T-shirts printed with "Falun Dafa is great" and "Truthfulness Compassion Tolerance," the Divine Land Marching Band brought a refreshing look to the parade. The band won waves of cheers and applause along the parade route. Practitioners distributed information about Falun Gong. Many people couldn't wait to find out more about Falun Gong.

The parade committee gave the band high praise when it passed the reviewing stage. One of the organizers said, "We thank the Falun Dafa Divine Land Marching Band for their participation, their beautiful costumes and music!" Another organizer on the stage gave the band a thumbs-up.

A woman from the Netherlands followed the Divine Land Marching Band to the end of the parade route and asked the band members to pose for a group picture with her. She specifically took pictures of the words "Falun Dafa is great" and "Truthfulness-Compassion-Tolerance" on their T-shirts. She enjoyed the music very much and took an informational flyer. When she found out that Falun Gong was a cultivation practice, she was very excited and said would introduce it to her son.

A man from Vancouver said that the Divine Land Marching Band was his favorite among all the groups in the parade. He thought that their comportment was great and their performance in front of the stage was great!

A resident of Montreal, who had seen the parade last year, said, "They are wonderful! Very very terrific! Their performance last year was great too!"

A Chinese family was filled with happiness when they saw the band. Another Chinese person said, "The costumes of the Divine Land Marching Band are the best!"

“Million Minutes of Meditation: A New Project Sponsored by Friends of Falun Gong Gives People an Easy Way to Position Themselves Correctly”