(Clearwisdom.net) The International Truthfulness-Compassion-Forbearance Art Exhibition in Hsin-Chu, northern Taiwan, came to a close on July 12, 2009. Through this exhibition many people, including professionals, came to understand and appreciate Falun Gong practitioners' courage and unwavering spirit in the face of the brutal persecution in China. Some condemned the Chinese Communist Party's (CCP) brutality against Falun Gong practitioners and the trampling of human rights in China, and some expressed interest in learning the practice. 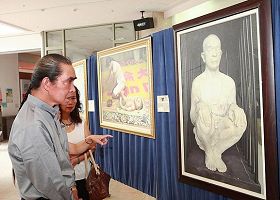 A visitor listens attentively to an introduction of the paintings

Mr. He is an interpreter at the National Palace Museum. After seeing the painting of a grandmother embroidering a banner late at night in preparation for a truth-clarification activity, he was moved. The painting reminded him of the love he received from his parents. When seeing the painting "Call of Innocence" He said that he could see in the little girl's eyes that she truly wants people to understand the facts of the persecution.

Mr. He thanked the host for telling him the stories behind the paintings. In the guest book, he painted four characters, praising the paintings and explaining his understanding of the paintings, which is, that they displayed great love. He wished the Falun Dafa Association success with the exhibition and said that he hoped that more people would come to learn more about Falun Dafa.

Painter: Crimes of the Persecution

Painter Ms. Zhuo believes in the existence of God and Buddha. She said that it was wrong to persecute benevolent people, especially practitioners who believe in God. She repeatedly stressed that the police who tortured practitioners had committed serious crimes. Before she left the exhibition, she wrote in the guest book, "Meditating without becoming distracted is a sign of reaching extraordinarily high levels."

Member of Art Society: Promote the Exhibition in Schools

A member of an art society exclaimed over the "marvelous paintings" that he hopes that the host will promote the exhibition in schools. He wants the younger generation to see what beauty really is and get a good understanding of the CCP's evil nature.

The host invited two well-known martial artists to the exhibition. The artists are dedicated to promoting traditional Chinese culture and traditional art. They were amazed by the practitioners' superb and masterful painting skills. They appreciated the fact that Falun Dafa is beneficial to people's health and morality.

After seeing the paintings, one of them saw the book, Nine Commentaries on the Communist Party on the counter. He said he once saw Falun Gong practitioners in Taichung giving away this book to Chinese tourists and he was very curious about its content. He asked for a copy and promised to read it carefully. Before they left, the martial artists thanked the practitioners for letting them know about the beauty of Falun Dafa and about the crimes the CCP has committed in the brutal suppression.

Retired Doctor: People Have Long Lost Faith in the CCP

A retired medical doctor, 86 years old, stood a long time in front of the painting Tiger Bench. He said that it reminded him of what he saw on the street in his hometown in China when he was a teenager. Gangsters were punished with the exact same torture method. Now the punishment is being used to torture kind and law-abiding people. The doctor couldn't believe his eyes.

The doctor saw the CCP's brutal and indifferent attitude towards lives as he learned that the medical system was now being used to steal practitioners' organs for profit. The doctor believes that the information Falun Gong practitioners have disclosed has great power and will be effective in opposing the CCP's tyranny. He believes that people around the world have long lost their faith in the CCP.

Can't Believe the Persecution Is Not Over

A man stood a long time in front of the painting depicting organ removal from a living Falun Gong practitioner. He thought that the CCP had changed for the better and he couldn't believe that it was as brutal as ever. After he heard the facts of the persecution, he came to a conclusion that the CCP made things look better on the surface in order to cover its crimes and brutality.

I Am Glad I that I Came Here Today

A woman who is a Christian came on the last day of the exhibition. After listening to the introduction, she admitted that she could not believe what she was hearing, for she thought the persecution was over. She also changed her mind about Falun Gong. She explained, "I used to think ill of Falun Gong. I am glad that I came here today or I would have never known that it teaches people to be good." She thanked the host for telling her all about Falun Gong. She finally understood that the purpose of holding so many exhibitions was to help end the persecution.

The woman was impressed with how well practitioners could paint. She carefully looked at every painting and noticed every small detail.