A Young Man from Germany: "I Must Study This, It's Such a Good Practice" (Photos)

(Clearwisdom.net) On June 20, 2009, on Augustusplatz in the center of Leipzig, a city in eastern Germany, Falun Gong practitioners held an information day. "Protesting the CCP's Ten Years of Bloody Persecution, Supporting the 56 Million Brave People Who Have Quit the CCP and Its Affiliated Organizations" was the theme.

Augustusplatz is crowded with pedestrians on weekends. This square, which is the largest in Germany, is historic. It not only attracts tourists from around the world but is also the location of the main building of the biggest TV station in east Germany, MDR, and the main building of Leipzig University. The famous Gewandhaus and Oper Leipzig are also there.

This very square that witnessed the historic decline of the German Communist Party drew many pedestrians to stop and look at the banner supporting those that have quit the CCP and at the display boards showing the terrible persecution of those who believe in Falun Gong. Many inquired about how the CCP infringes on human rights.. 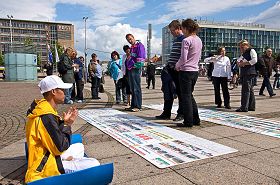 People stop to look at the display boards 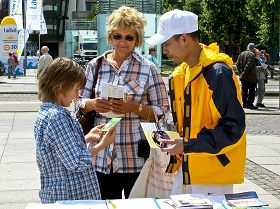 A child accepts a card with the words "Falun Dafa Hao" ("Falun Dafa is good") printed on it. 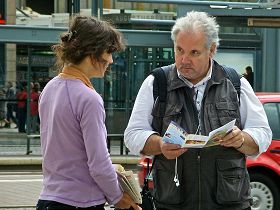 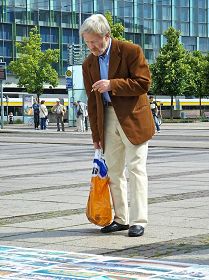 After a tourist from the United States saw the headline in Chinese on the banners, he used fluent Chinese to tell the practitioners that he had lived in Taiwan for three years and had learned there that Falun Gong was persecuted in mainland China. He also said that he knew that there were several hundred thousand people practicing in Taiwan but he didn't expect to see Falun Gong on his visit to Germany, so he was delighted. 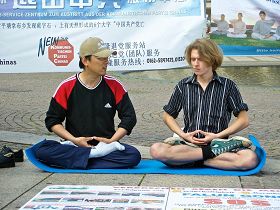 A young German man (on the right) learns the fifth exercise

A young German man was drawn in by the practitioners' demonstration of the meditation movements. After learning about Falun Gong, he asked to learn the exercises right away. In a short five minutes, he was able to sit in the proper double lotus position and learned the fifth exercise. After finishing, he said, "Since it is such a good practice, I must continue to learn it." 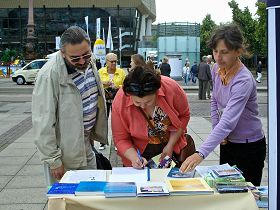 Signing their names to condemn the CCP's disregard for human rights.

When a German woman with her two children came up to the information table, even before the practitioners had finished explaining the situation to her, she got a pen and signed the petition form. She said, "I know too well what the Communist Party is like. You don't have to tell me, I know that what you have written about on the display boards about how the CCP treats Falun Gong is true, because I used to live under Communist rule." The mother took her children to see the display boards, and explained to them picture by picture so that they would have an understanding of the CCP's despotic rule and its crimes against humanity.

Leipzig University draws many students from China to study every year. On this information day, many young students listened carefully to the explanations about the persecution and expressed their support for the idea of freedom of belief.