On July 16, more than one thousand Falun Gong practitioners held a rally in front of Capitol Hill in Washington D.C., calling for an end to the 10-year long persecution.

Nine U.S. Congressmen and more than 10 representatives from Non-Governmental Organizations came to the rally and gave speeches supporting Falun Gong. Congressmen Mike Coffman and Ted Poe could not come, but they sent supporting letters to the Falun Dafa Association condemning the brutal persecution. Congressman Mike Coffman from Colorado said in his letter:

I am very troubled that Chinese officials seem to be escalating the unwarranted persecution of Falun Gong practitioners.

The Falun Gong Information Center charges that the Chinese government has arrested more than 8,000 citizens and executed more than 100 last year. The Falun Gong Information Center also asserts that the city of Weifang is an extremely dangerous place for any follower of Falun Gong. These followers report that torture is used routinely there and many detainees have been tortured to death. Others are sent to Reeducation Through Labor (RTL) camps and are never seen again. Their peaceful demonstrations continue to draw arrests, beatings, and other forms of torture at the hands of the "6-10 Commission," a security force tasked with the ruthless enforcement of the ten year old Falun Gong ban.

This brutal persecution of Falun Gong followers is unacceptable and cannot be permitted to stand.

I strongly support the practitioners of Falun Gong in their struggle to practice their own form of spiritual discipline. A fundamentally peaceful spiritual and physical exercise poses no threat to the Chinese government. The only thing threatened is the personal freedoms of tens of millions of practicing Falun Gong followers. I would respectfully appeal to the Chinese government to take the appropriate steps to protect the basic human rights of Falun Gong practitioners in China." 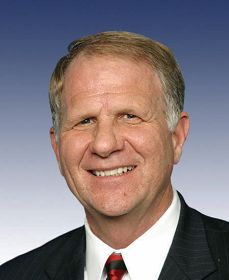 Congressman Ted Poe from Texas said in his letter:

"I would like to thank all of Falun Gong supporters and practitioners who have participated in this week's events.

It's been ten years since the Chinese government banned the practice of Falun-Gong and began its severe and brutal crackdown towards those who practice its principles of truthfulness, benevolence, and forbearance.

The practitioners of this ancient practice have been beaten, tortured, and illegally imprisoned for simply seeking to peacefully carryout their commitment to their religion. Hundreds of stories from victims of persecution have flowed out of China and poured into the ears of sympathizers from all over the world.

Too many people living in the United States take for granted the freedom to openly practice our beliefs without worrying of the consequences. Americans are privileged to live in this great nation where democracy is the rule of law. Unfortunately, not everyone is as blessed. As such, I feel a certain responsibility to speak out for those whose freedom has been cut short and whose voice has been silenced by an oppressive regime.

Last year, I had the opportunity to cosponsor a resolution that called upon China to end the human rights abuses of its citizens. Seeing as little has changed, I once again call out to the Chinese government to stop its religious persecution and allow its' citizens to freely practice their spiritual beliefs. Too many innocent men and women have died, and although their deaths have not been in vain, it's time for change and that time is now. "