Canada: Rally in Vancouver Calls for Justice and an End to the Persecution (Photos)

On July 19, 2009, Falun Gong practitioners held a rally in front of the Vancouver Art Gallery to protest the ten-year persecution of Falun Gong in China. Many political figures and human rights activists participated in support of the rally and peaceful protest. Several practitioners that were rescued out of China and immigrated to Canada spoke of their experience of being persecuted in China. 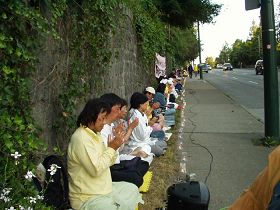 Falun Gong practitioners gathered in front of the Chinese Consulate in Vancouver to mourn those who died under persecution in China.

"As of July 20, 2009, the CCP's brutal persecution of Falun Gong has lasted ten years. It is also the tenth anniversary of Falun Gong's peaceful protests against the persecution. During this time, there are more than 3,290 confirmed deaths of practitioners under persecution. The actual number is higher," stated a representative for the Falun Dafa Association of Canada. 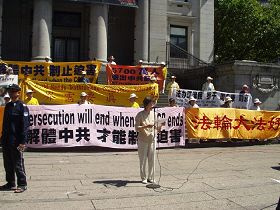 A representative from the Canada Falun Dafa Association reading a statement.

Association members declared that eliminating the CCP is the only way to end the persecution, and called on people of justice to help.

The Coalition to Investigate the Persecution of Falun Gong (CIPFG) chair and human rights lawyer Clive Ansley provided a statement to be read at the rally. Attorney Ansley said that ten years ago, on July 20, 1999, the CCP initiated a movement that called for the torture and murder of 70 to100 million Falun Gong practitioners in China. CIPFG said that the CCP's call has turned into genocide.

Ansley called on the world's media to begin reporting in depth about the persecution. He recommended that the public read the investigative report on live organ removal of Falun Gong practitioners, published by David Kilgour, former Member of Parliament Edmonton-Beaumont and Secretary of State for the Asia-Pacific Region, and David Matas, renowned human rights lawyer. 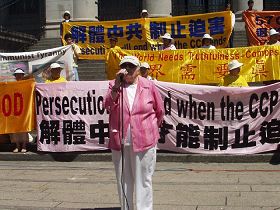 Ms. Holt compared the genocide of Falun Gong to that of the Jewish people in Germany in 1936. At the time, no one spoke up against Hitler's criminal acts and silently acquiesced to Hitler's greed and insanity.

Ms. Holt spoke highly of practitioners' sitting in protest in front of the Chinese Consulate around the clock over the past years. "This is a symbol of Canada's value of freedom," said Ms. Holt. She admired practitioners' courage, stating, "They are leading the world towards a future without genocide. If there were a group like Falun Gong in 1936, the genocide would not have happened." 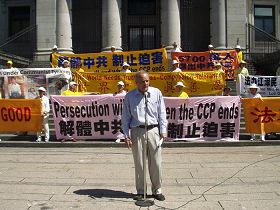 Richard Stewart, Mayor of the city of Coquitlam, spoke at the rally. He thanked all for coming to help end the persecution. He appreciated the fact that through this rally, practitioners are exposing what is happening in China.

Mr. Stewart said, "Falun Gong's story is heartbreaking. The people who practice Truth-Compassion-Forbearance are being tortured in China. This is why I am here today! This is why I speak up for them."

He continued, "I admire their belief and contribution to our country and countries throughout the world." He wished for the world's people to enjoy freedom of belief, speech, religion and practice. He promised to fight for their freedom.

Mr. Stewart joined the practitioners carrying banners and held up the one with the inscription, "The World Needs Truth-Compassion-Forbearance." Before he left, he sincerely thanked the Falun Gong practitioners for what they are doing.

The Mayor of Burnaby, Mr. Derek Corrigan, said in a letter to be read at the rally that he hoped Prime Minister Stephen Harper would condemn the human rights violations in China. Mr. Corrigan urged Mr. Harper to restate Canada's strong opposition to violence and persecution, especially the persecution of Falun Gong, to commemorate the day of July 20. 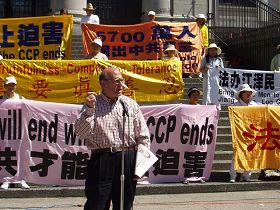 Canada Tibet Committee Vancouver Chapter vice-president Mati Bernabei said, "We have freedom of speech and we cannot keep silent about the CCP's persecution of Falun Gong." Mr. Mati praised practitioners' contribution to the community and admired their courage in upholding truth and justice over the past ten years. 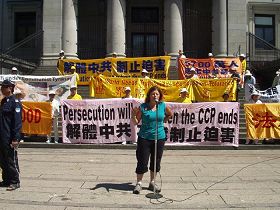 Sadie Kuehn, chairman of Friends of Falun Gong, said in her statement that she would stand with Falun Gong practitioners without hesitation. She expressed that she would request all levels of the Canadian government to clearly and firmly demand China to end the persecution.

Practitioners Speak of the Torture they Suffered

Jing Cai, her sister Jing Tian and brother-in-law Chen Song were rescued out of China and arrived in Canada two months ago. Her brother Jing Yu was sentenced to ten years in prison in March 2003 and is suffering inhuman tortures. Her mother lost an eye from the torture and is still imprisoned. 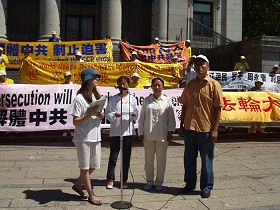 Practitioners Jing Cai, Jing Tian and Chen Song from Shenyang spoke of being tortured in China

Zhang Zongyu from Changchun was also rescued out of China and arrived in Canada not long ago. He was arrested a dozen times in China and tortured savagely. He was shocked with electric batons in sensitive areas, around the clock. He suffered non-stop beatings, suffocation with plastic bags, burning with cigarette lighters and cigarettes, and long-term sleep deprivation. After Mr. Zhang was arrested in 2003, his face was badly mutilated from electric shocks, and the flesh on his legs was burned away. His mother and sister shouldered tremendous pressure from the persecution and died as a result. 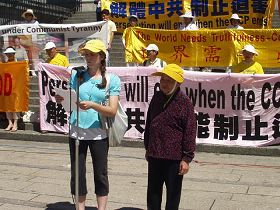 Ms. Yang, 86 years old, calls for rescuing her daughter who was kidnapped by the CCP

Ms. Yang has lived in Canada thirty years. Her daughter, 56-year-old Falun Gong practitioner Yang Jinyan, lives in China. She was illegally arrested on July 15. This was the seventh time she was arrested since 1999. The CCP forced her husband to leave his job in order to monitor her. Ms. Yang called on the Canadian government to help rescue her daughter.

“Ms. Shen Yueping Dies As a Result of Abuse in Prison”