On July 18, 2009, local Falun Dafa practitioners, along with nearly one thousand practitioners from Central Taiwan, gathered at a popular tourist attraction in Nantou County. They called on the people of the world to come together in an effort to end the Chinese Communist Party's (CCP) ten-year persecution of Falun Gong. Afterwards, a candlelight vigil was held in memory of the many practitioners who lost their lives to the persecution in mainland China. 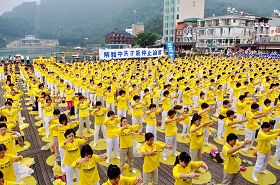 Nearly one thousand practitioners gather for group exercises on July 18, 2009

A little after 1:00 p.m., practitioners gathered in Dayishao Harbor at Sun Moon Lake, the largest natural lake in Taiwan, and began the day's event by doing the Falun Gong exercises and offering free exercise instructions. Then, the Divine Land Band's hundred-plus members performed stirring songs, attracting the attention of the tourists, many of whom expressed strong support for a peaceful and rational end to the persecution. Although there were periods of very light rain, the practitioners stayed for the whole event. 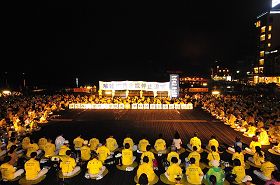 The press conference and candlelight vigil began at 6:30 p.m. 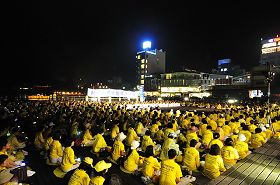 Candlelight vigil to call for an end to the persecution 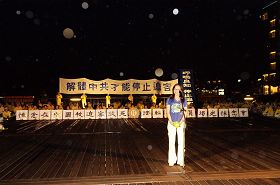 Taiwan Falun Dafa Association representative: "Only by disintegrating the CCP can the persecution end"

Professor Hou Nianzu, spokesman for the Taiwan Falun Dafa Association, said that the purpose of the rally is to tell the world, "Only by disintegrating the CCP, can the persecution end." He said that the CCP uses state funding to cruelly suppress the one hundred million Falun Gong practitioners in China. According to Minghui/Clearwisdom website reports, 3,292 practitioners have died as a direct result of the persecution and that more than one hundred thousand practitioners have been detained or sent to forced labor camps. Although these figures may appear large, they only represent the tip of the iceberg.

Mr. Hou emphasized that on the surface it looks as if the persecution is only targeting Falun Gong practitioners, but in fact, it is targeting every Chinese person in the world. The CCP has deceived many Chinese people into believing the malicious and damaging lies they have spread about Falun Gong. As a result, many people have become accomplices in this crime against humanity by exchanging their conscience for financial rewards during this brutal and senseless persecution. Mr. Hou reiterated that in order to end this unprecedented persecution, "We must first disintegrate the CCP."

County Councilwoman: Taiwanese must clearly see the true nature of the CCP

Ms. Xu Ahgan, a Nantou County councilwoman, was invited to support the rally. She said that when she saw the Falun Gong practitioners doing the serene exercises, she couldn't help imitating the movements. The fact that the CCP outlawed such peaceful mind/body exercises in China proved to Ms. Xu that the CCP had lost all sensibility. She concluded by saying, "Taiwanese must clearly see the true nature of the CCP and should not put any hope in the [CCP] regime."

Medical doctor: The power of kindness is in fact more moving

Mr. Bai Mingzheng is a professional traditional acupuncturist and a supporter of Falun Gong. He stayed for the entire event and quietly observed the practitioners. He said, "Today's scene is very moving. Because of the sincerity and persistence demonstrated by Falun Gong practitioners' non-stop activities, a sense of peace has permeated the area. This sense of calmness is very powerful. A little flame can burn the whole plain. The ten-year effort of Falun Gong has come to fruition, resulting in more and more people learning the facts about Falun Gong, and recognizing exactly what Falun Gong is." In an encouraging voice he exclaimed, "Keep it up, Falun Gong!"

Ms. Li, a teacher in Taichung County, was invited to the event by an old schoolmate of hers. Ms. Li said that many years ago, she saw Falun Gong posters displayed at Anping Castle in southern Taiwan, but never paid much attention to them. After her schoolmate introduced her to the book Zhuan Falun, she read it and had a new understanding of Falun Gong. Today was the first time she learned all five exercises. Referring to the CCP's brutal persecution, Ms. Li commented that in an environment where human rights simply do not exist, some people naturally feel afraid to practice Falun Gong. But in a free society like Taiwan, she is able to exercise her right to learn Falun Gong without fear of reprisal [from the government]. 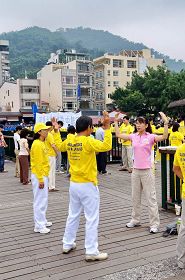 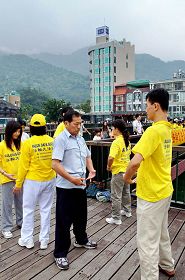 Mr. Lan is the tour bus driver who took the practitioners to Sun Moon Lake. He formed a predestined relationship with Falun Gong by taking practitioners to various experience sharing activities over the last several years. At that time, practitioners gave him a copy of Zhuan Falun, and invited him to join the practice. He read the book and learned that Falun Gong is is a mind/body practice that teaches people to be good people. In the past, after driving practitioners to different places, he would join in some activities, but today is the first time he learned the exercise movements.

Mr. Lan shared the fact that once he had a bad skin rash on his back, and his skin became thick like a cow's hide. He visited several Western and traditional Chinese doctors but none of their treatments worked. At that time he sat in on a practitioners' experience sharing meeting and heard how practitioners experienced various forms of body cleansing. He then realized that his rash may be a sign that he too was undergoing a body cleansing, just like Master Li said in his book. He then threw out all of his medicines and within two days, his rash completely disappeared. 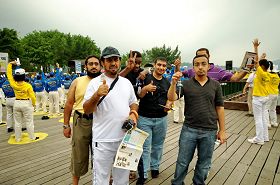 A family from Yangmei Town, Taoyuan County, came with their twin daughters. They were curious as to why so many people had gathered here. The practitioners told them about the wonderful practice of Falun Gong and about the persecution going on in China. After quietly listening, the mother said that when she gets back home, she will look up practitioners in her area and learn the practice.

A voice of justice speaks out despite the rain and wind

Ms. Pan was the hostess for the event. She said that every year practitioners hold a rally here and have a parade, as well as a candlelight vigil on July 20, to condemn the CCP's brutal persecution of Falun Gong. They hope to awaken people's conscience and call for an end to the persecution. Over the past ten years, practitioners have continuously worked to stop the persecution, using peaceful and rational means, but the CCP has never changed. Falun Gong practitioners now firmly believe that only by disintegrating the CCP can the persecution be stopped. Currently, many Chinese people now support Falun Gong, including many defense attorneys who have come to understand Falun Gong's plight. To date, more than 57 million Chinese people have withdrawn from the CCP and its affiliated organizations.

Mr. Zhan, who has been practicing Falun Gong for about a year now, said that this was the first time he joined an event that condemned the CCP and it was the first candlelight vigil he attended in memory of fellow practitioners who have died as a result of the CCP persecution. He said the events of the day moved him to tears and the movie that the practitioners showed helped him see the ruthless nature of the CCP. Mr. Zhan, a teacher, said that he told his students the facts about Falun Gong in the hope that they would not be tempted to profit from the persecution and lose their precious virtue.

With evening approaching, the tiny golden flames of the practitioner's candles were the only lights that could be seen breaking through the darkness at Sun Moon Lake.