(Clearwisdom.net) On July 20, 2009, Falun Gong practitioners in Ukraine held events in different places to commemorate their fellow practitioners who were tortured to death and to call attention to the need to end the CCP's ten-year persecution.

Practitioners in Kiev unfurled banners reading, "Falun Dafa Is Great," "Truth-Compassion-Forbearance," and "Disintegrate CCP and Stop the Persecution" in front of the Chinese embassy. They also held banners detailing the CCP's use of torture and its harvesting of organs from living Falun Gong practitioners.

The practitioners sat quietly on the stairs to protest the persecution. Passersby paused to learn the facts. 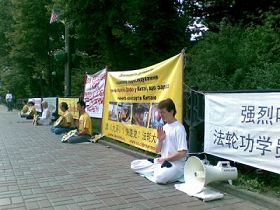 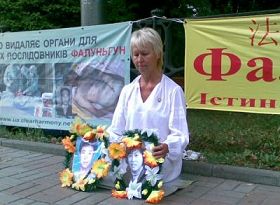 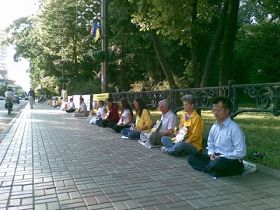 Tosina, a practitioner from Kramatorsk, told the reporter, "July 20 is a special day for Falun Gong practitioners. Ten years ago, the CCP initiated the persecution. Today's events will allow more people to learn the facts and perhaps offer to help stop persecution." Practitioners in Kramatorsk set up posters in downtown showing how Falun Gong has spread around the world and exposing the CCP persecution of Falun Gong in China. The event caught the attention of many passersby. They read the posters and listened to practitioners' explanations. Many signed the petition to protest the persecution. 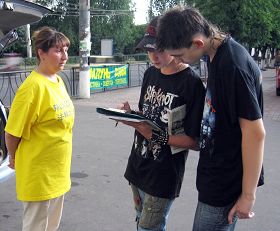 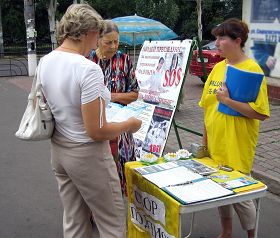 .Passersby listen to a practitioner's explanation

“Napoli, Italy: Chinese Tourists Recognize that Falun Dafa Has Spread Around the World”

“Belgium: Falun Gong Practitioners Hold Candlelight Vigil in Memory of Those Who Died in the Persecution (Photos)”