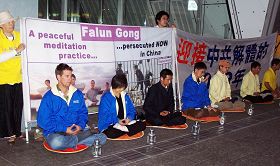 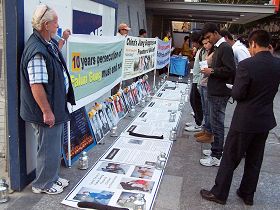 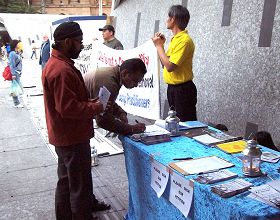 People sign a petition calling for an end to the persecution 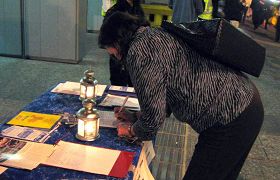 Many local people felt indignant at the CCP's atrocities. They said, "The CCP is really too bad!" "I don't think that the CCP can hold many more years!" Many people who have learned the facts signed the petition in support of Falun Gong practitioners' efforts to end the persecution.

Three Chinese overseas students had learned of the CCP brutality, and announced their withdrawals from the CCP Young Pioneers and Youth League on the spot. One said that he wanted to quit the CCP organization using his real name.

A Falun Gong practitioner said that he hoped the governments and people in western society would stand up for justice, and uphold righteousness and conscience so as to end the persecution soon.

Alma from Taiwan started practicing Falun Gong seven years ago. She said that she found the real meaning of life when she took up Falun Gong. As the persecution has persisted for ten years, what she most wanted to say was, "There should not have been any persecution of Falun Gong in China, it should be stopped immediately!"

During the event, a Chinese Falun Gong practitioner in her sixties recounted her experience of being persecuted when she was in China. Since she started practicing Falun Gong in 1999, for refusing to give up her belief in Falun Gong, she was arrested twice, and was extorted out of 10,000 yuan. The CCP agents ransacked her home twice, and confiscated a computer, a laptop computer, a cell phone and other items.

“Germany: Commemorative Activities Calling for an End to the Ten-Year Persecution Held in Essen City (Photos)”