In the afternoon on July 19, 2009, crowds of Falun Gong practitioners wearing yellow shirts gathered at Xinyi Square across the street from 101 Building. Over 1500 participants formed a parade to protest the Chinese Communist Party's (CCP) cruel persecution of Falun Gong and human rights in China. 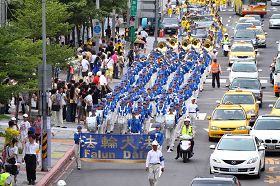 The grand parade draws the attention from many passersby on the streets.

Bus after bus of tourists from China came to see 101 Building, the tallest building in the world. Across the street, they saw eight huge banners saying "Emergency rescue of Falun Gong practitioners in China," "Falun Gong teaches Truth-Compassion-Forbearance," "Dissolving the CCP is the only way to stop the persecution," and "Support 57 million Chinese people who quit the CCP." 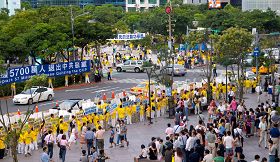 Tourists from China watch the Falun Gong parade in front of 101 Building. 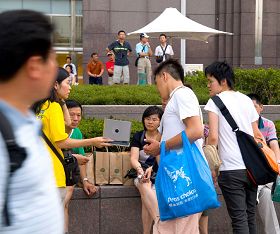 The Divine Land Marching Band led the parade performing songs that showed people the beauty of Falun Dafa. The celestial maidens, the young practitioners' waist drum team, and practitioners' demonstration of the Falun Gong exercises drew a lot of attention. Through torture re-enactments, practitioners exposed the CCP's evil crimes of torturing practitioners in China and removing their organs while they were still alive. 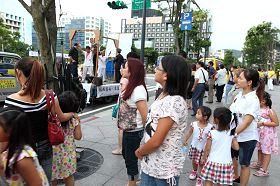 Tourists from China shocked by the torture re-enactments. 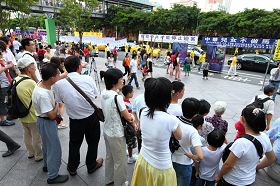 Chinese tourists watched closely the Falun Gong parade that went on for miles. Some of them took photos and many practitioners waved to them with smiles. 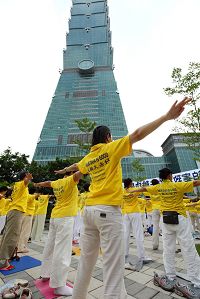 Every day after 4 p.m., there are Falun Gong practitioners doing exercises in front of one of the most popular tourist spots in Taiwan, the 101 Building. 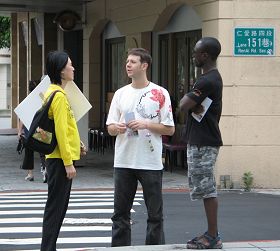 Mark, a Christian from Boston, has been in Taiwan for two years. He had seen Falun Gong everywhere in Taiwan and the US as well, but still did not know much about it. After talking with a practitioner, he said that he wanted to learn the practice. He learned that near where he lives, there are two groups of practitioners who can teach him.

When the parade passed Sun Yat-sen Memorial Hall, a fashion show host and her boyfriend came to asked where they could learn the practice. A practitioner told them there is a group who practice every day in a park near where they live. 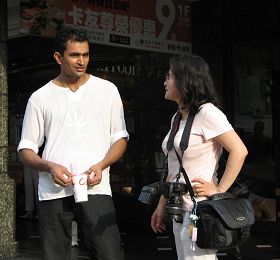 A Muslim watched the parade for a long time. He told a practitioner that he couldn't understand why the CCP outlawed such a peaceful and kind group. The practitioner explained to him that Falun Gong teaches Truth-Compassion-Forbearance, which is opposite to the nature of CCP- lies, wickedness, and violence. The CCP could not stand that Falun Gong did not believe in its ideology and thus suppressed Falun Gong to continue its dictatorial rule. After learning about the persecution, the man told the practitioner, "I support you!"

The Most Invaluable Thing

Shuhui brought her two daughters to join the parade. The two girls handed out fliers to the spectators of the parade. Shuhui said most people in Taiwan, though they support Falun Gong, did not know much about the CCP and Falun Gong.

Shuhui has been practicing Falun Gong for five years. Her sister learned the practice in Germany and introduced it to her. After reading the book Zhuan Falun, she immediately knew Falun Gong was what she had been looking for all her life. "It's the most invaluable thing." 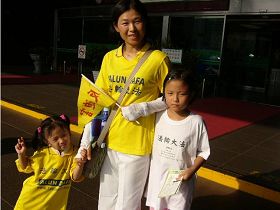 Shuhui and her two daughters

Shuhui was pregnant a year after she started the practice. A doctor told her she might die in labor because her placenta was situated in an abnormal position and would cause massive hemorrhage. "I didn't do anything. Nine months later, I had a safe and smooth labor. My doctor told me it was miraculous and thought Falun Gong was extraordinary."

Ms. Chung brought her husband and two children all the way from eastern Taiwan to Taipei. Chung said she and her family wanted to come out here and call for the attention for basic human rights and universal values. 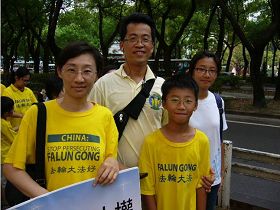 Chung, her husband, son and daughter come from eastern Taiwan to join the parade in Taipei.

It's been 11 years since Chung began practicing Falun Gong. She used to have severe gynecologic disease and urinated blood. Doctors told Chung that her kidneys failed and she would have to use antibiotics for her illness all her life. However, she completely recovered after she learned Falun Gong. All her family and relatives witness the miracle. Even her doctor said the impossible had occurred. "It's wonderful that I learned Falun Dafa. Now my whole family practices Falun Gong."

Mr. Lu is in his 70s. Though he isn't a practitioner, he walked alongside the parade. He said that he knew Falun Gong improves people's health and morals and is welcome around the world except in China. He couldn't understand why the CCP is afraid of people being healthy and wanting to be good. "It's impossible for me to imagine the so-called suppression and the killing that needs no reason. This is a meaningful event. Unfortunately I am not a practitioner, but I really want to be part of the parade. I walk next to the parade and it makes me feel really good."

Mr. Chen is a security guard in a business building located on the parade route. He saw all the banners, displays, and photos of rallies and practitioners who died in the persecution. He thought the CCP was horrible and unbelievable to persecute good people. "The worst is that the CCP steals practitioners' organs while they are still alive and sells them. Even God would not allow it." "The appeal of Falun Gong is very legitimate and meaningful."

The head of the traffic team of Xinyi Police Bureau in Taipei said that the parade was very orderly and well-organized. The practitioners' conducted themselves very well and it wasn't difficult for the team to keep the traffic flowing.

Many residents in tall buildings came down to watch the parade after hearing the music from the Divine Land Marching Band. Ping, 89 years old, watched the parade until it left the area. He came to Taiwan in 1945 after the Chinese Nationalist Party lost China to the CCP. Ping kept saying it was terrific to be able to see such a beautiful parade in Taiwan. He appreciates the teachings of Truth-Compassion-Forbearance. Other residents Huang and Chen said that it was the first time they saw a peaceful and orderly parade like this. It gave them a good feeling.

A Wish to Say "Falun Dafa Is Good"

Wang, 71, wanted to say "Falun Dafa is good" on such an important date. Wang said with grateful tears, "It's been ten years since I began practicing Falun Gong. My chronic diseases in the past 40 years including venous aneurysm disappeared after the practice. It was a miracle. Falun Gong is nothing like the CCP said in its propaganda."

Ms. Li came from Vietnam and lives in Shilin. She brought her seven-year-old daughter to the parade. Her boss introduced Falun Gong to her. After learning the practice, she was more efficient in doing her work and became healthier. "I used to be sick almost every month. I did not have energy at all. My head, shoulder and kidney hurt. I vomited a lot. These symptoms disappeared after I learned Falun Gong." Li's daughter added, "I think Falun Gong is great. It makes the bad things that make people sick go away."

“Indonesia: Practitioners Hold a Series of Activities to Call for Conscience (Photos)”

“Falun Gong Practitioners Deliver a Joint Statement, Appealing to Governments Around the World to Help Stop the CCP Persecution”