(Clearwisdom.net) On July 11, 2009, the Osaka branch of the Coalition to Investigate the Persecution of Falun Gong (CIPFG) held a conference reporting the latest evidence of organ harvesting by the Chinese communist regime. David Matas, a renowned human rights lawyer who has won numerous Canadian and international awards, including the Governor-General's Confederation Medal, cited a large number of cases to call for attention to the "organ pillaging by the Chinese Communist Party (CCP)." He pointed out that sufficient data has indicated that this crime is still going on today. 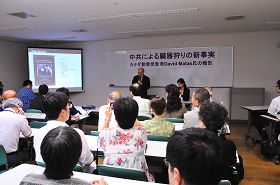 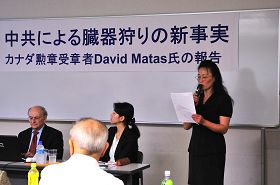 Matas explained in his speech that organ transplant is an important revenue source of the communist regime's medical institutions. In addition, the waiting period is extremely short in China: a matter of days. In other countries, it takes several months or even years. This has indicated that there exists a large population of organ suppliers, who can be killed whenever patients have a need for live organs.

Falun Gong is a Qigong practice that was made public in 1992. In the beginning, the Chinese communist regime actively promoted it. However, in 1999, the regime started to suppress Falun Gong because its principles of Truthfulness-Benevolence-Forbearance contrasted sharply against the CCP's practice of spreading lies and resorting to cruelty and violence. Since then, Falun Gong practitioners that refuse to give up their belief have been arrested. Many have disappeared. Matas said that Falun Gong is not an organization, nor is it a grassroots movement. It has just a few sets of exercises plus spiritual guidelines. Anyone can start practicing the Falun Gong exercises without having to register with anyone or joining any organization. Anyone can quit practicing at will. All information related to practice sites is publicly listed over the Internet. Mr. Li Hongzhi, the founder of Falun Gong, has published books and delivered public speeches. These books and speeches can be found in bookstores as well as over the Internet. He is simply a spiritual leader, not a head of any organization. Because Falun Gong has no organizational structure, the CCP has no way of controlling it. For this same reason, the regime has been especially cruel in its suppression of Falun Gong. The regime has been intimidated by millions upon millions of follower, who try to be honest. What a rogue, corrupt regime fears most is people trying to adhere decency and honesty. If no one takes bribes, how can a corrupt regime operate without being able to offer them? The CCP is not able to hold dialogues with Falun Gong practitioners. It can only resort to violence.

Because of the CCP's implication policy, many practitioners unlawfully arrested have refused to give out their names, addresses or work units so as not to implicate their families. As a result, they have become an easy target of victims of organ pillaging and have disappeared forever.

Matas made it clear in his speech that this act of organ harvesting has violated human moral standards as well as the basic norm of the international transplant community. It is the most serious violation of human rights. As a human rights lawyer, Matas said, "It is my responsibility to tell everyone about it [organ harvesting]. This terrible thing that is taking place in China is a challenge to the conscience of not only people in China but also all the people around the world. Anyone who has learned about it has to stand up to stop it."

During the conference, Ms. Jin Zirong recounted her personal experience of being persecuted by the CCP. She was arrested for giving out Falun Gong leaflets. She was held in a prison for 18 months. While in prison, she was tied to a bed supposed to be only used for restricting inmates on death row. She was force-fed. She also had gone through a blood test for no reason. She said that some Falun Gong practitioners have never returned after taking a blood test.

Ms. Ming Xia, editor-in-chief of the China Monthly magazine in Japan, said that she heard that organs were taken from those who were just executed when she was in China. Associating that practice with what is happening to Falun Gong practitioners today, she felt the CCP has made itself an enemy of all the Chinese people.

Mr. Yamaguchi, a brain-neurology expert, said at the conference that reports in the past few years indicated that Japan is the country with the largest number of organ recipients in the world. There is nothing wrong for us to aspire to have a healthy body. However, no one should be willing to achieve this by killing another person. The CCP's organ pillaging has weighed heavily on him. He believes that Japan shares responsibility on this issue.

“San Francisco: A Candlelight Vigil Against the Persecution (Photos)”