(Clearwisdom.net) On the afternoon of July 18, 2009, Turkish practitioners held a series of activities at Aykut Barka Park in Istanbul to expose the Chinese Communist Party's atrocities against Falun Gong practitioners and to commemorate fellow practitioners who died during the persecution. 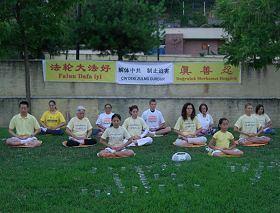 In the center of this famous park, the practitioners displayed three giant banners which read, "Falun Dafa is Good," "The Chinese Communist Party will Disintegrate," and "Truthfulness-Compassion-Forbearance." The practitioners then demonstrated the five sets of Falun Gong exercises.

The peaceful group practice site attracted many tourists who came in succession to watch the exercising and read the Falun Gong truth-clarifying materials. After learning about the ongoing organ harvesting atrocities, many people condemned the communist party.

“Japan: Falun Gong Practitioners Rally Against the Persecution in Front of the Chinese Consulate (Photos)”